Over the past several months a number of sources have claimed that Apple was about to get serious about competing in the ebook market. I discounted the reports as baseless clickbait hype, but it would appear I was wrong.

A trusted source has sent me several photos of Apple’s first ebook reader, as well as a lot of information on what it can do.

Yes, you read that right; Apple is going to release an ebook reader. It will be called the Apple Reader, and it will have a next-gen Domino 7.9″ E-ink screen.

The Domino E-ink screen hasn’t been announced yet, but I am told it is nearly twice as fast as existing E-ink screens, and with a resolution of 450 ppi, it is also significantly sharper. Apple has reportedly been customizing this screen for over three years, and my source says it has an improved frontlight and a touchscreen so sensitive that you could write calligraphy on it.

The Apple Reader is currently running a modified version of iOS which includes the iBooks app and Apple’s office suite but will not include support for most apps. Apple is optimizing for the screen’s performance, rather than trying to make the Apple Reader as capable as possible.

The Apple Reader will not have a speaker, but it will have Wifi and Bluetooth, and  you will be able to stream Apple Music.

Apple Reader owners will also enjoy Apple’s new subscription ebook service, the Apple Library. Apple’s alternative to Kindle Unlimited will have a million titles in it at launch, including ebooks from three of the Big Five trade publishers.

So when can we expect this beautiful device to reach the market and throw Amazon off-kilter?

It is a less amazing but also more pocketable alternative to the Apple Reader, and it might be launched at the same time. 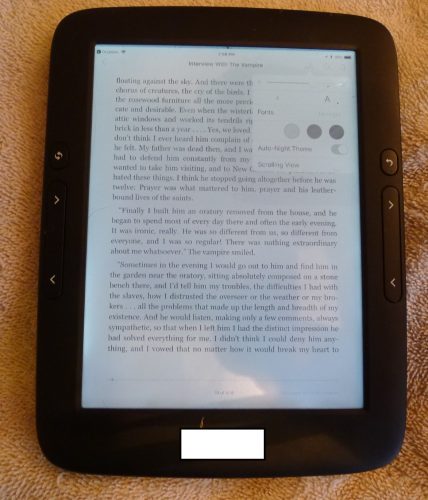 P.P.S. The device shown in the first couple photos is the Boyue Likebook Plus, a Chinese ereader than has a 7.8″ screen. The second model is the T62, a 6″ ereader also from Boyue. Both devices run Android, and what you see on the screen are screenshots from my friend Juli Monroe’s iPad Mini.

It is amazing what you can do with screenshots, isn’t it?

The new Domino E-ink screen was a good touch, no?

how long did it take you to figure out the other one was a joke?

First thing I did was check to see if it was April fools. THen I was like, it’s still the 31st, maybe its real.

You got me, Nate.

You had me for several paragraphs. After that I checked date. But it would be nice to have iBooks-in-e-Ink and better working iBooks (it’s cloud sync is garbage right now, it’s less garbage than years before but still only very basic things working)

Good one Nate! I actually thought April Fools had come early with the post the other day about Amazon and The Three Body Problem!

Sorry I didn’t drop in until today, but great article, and I loved seeing my screen shots in it. 🙂

I think you might have fooled me if I hadn’t been in on it.

Dammit, looked at the date first, saw 31st of March, got REALLY excited!

Yes, I fell bad about that. I so desperately wanted to get the story out there that I broke a cardinal rule.

[…] needs to turn this April Fool’s joke from 2018 into a reality, as in the interest of my wanting a single, coherent digital ecosystem […]

[…] Bradley Chambers that Apple should make an E Ink reader for Apple Books, whether or not it’s like this joke from two Aprils ago. It’s not terribly anti-monopolistic of me, but the older I get the more I […]

I’m not buying through any site that takes a commission from Amazon. Their practices are abhorrent.