Microsoft is getting a lot of attention lately for the Surface tablet, their latest attempt to bring Windows into the mobile market, and I applaud them for that. But the thing about this being their latest attempt is that (all?) most of the previous ones were failures (to one degree or another). 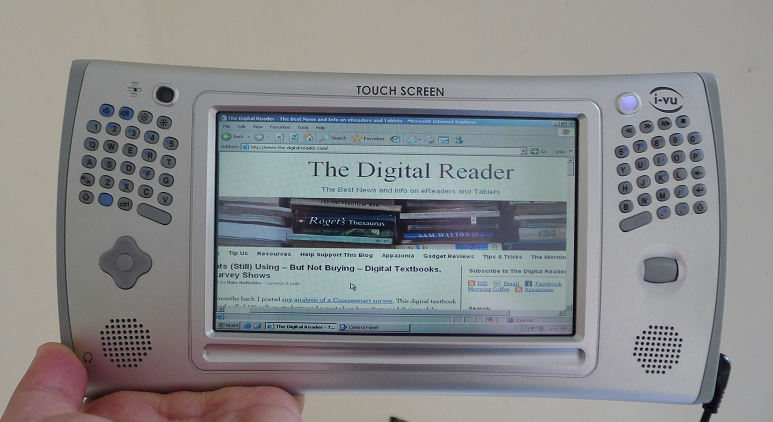 I have one such less than successful device sitting on my desk at the moment. If you’ve ever wondered where Nintendo got the inspiration for the new controller for the WiiU, look no further. I think I found it.

The Pepperpad 3 is a second generation "handheld web computer" (these days we just call them tablets) from Hanbit, a South Korean company.  This model came out in 2008 (according to blog posts found via Google), but it looks like it went through the FCC in 2006. I’ve known about the Pepperpad since 2007; at least a few members of MobileRead owned one, and I recall seeing it listed on Target’s website.

Unlike the original Pepperpad, which I’m pretty sure ran Linux, the PP3 runs Windows XP Embedded on a 500 MHz AMD Geode CPU with 256B RAM and a 30GB hard disk. This device is based around a 7″ resistive touchscreen (1024×768). It doesn’t have any card slots, but it does have Wifi, Bluetooth, USB (host and client, I think) and an IR port.  You can also find a VGA webcam as well as a mike and speakers on this baby.

The buttons you see on either side of the screen are a divided keyboard. Above the KB on the left side is a microphone and the webcam, and below the KB are the arrow keys. To the right of the screen is the rest of the KB as well as the power button and scroll wheel.

I’ve been playing with it this afternoon and I have decided that Windows XP really does not work well on a small touchscreen. (See, there’s a good reason for Bill Gates to not like touchscreens.) Putting XP on a tablet works about as well as say, putting the original unaltered Android 1.6 on a tablet. Both need a lot of polish in order to really be useful because they’re simply not useful in their raw state.

It’s not just that the screen is too small; I broke out my old set of styluses and dealt with it. No, I’m frustrated by all the shortcuts I cannot use as well as the cobbled together work-arounds. XP really cannot function without a keyboard, so they cut one in half and glued it on to either side of the screen. It’s almost enough to make you cry.

And the Pepperpad is surprisingly heavy. I think it weighs more than my iPad 2, and it might even weigh more than my Asus eeePad Transformer. As I sit here typing that, I have to wonder about the person described this as a "handheld", their hands must be huge.

I also have to wonder who would think this was a good idea; this model was intended to ship with Linux and a custom UI (I can see it in the manual on the FCC website), and yet it is running Windows XP. I can understand the desire to have more software support, but there are many, many apps which won’t work well on such a tiny screen. There’s an even larger number which won’t run well on a such an under powered CPU.

This is a fun toy, but I do think it’s the kind of device that should be mounted on the wall of every hardware developer along with a sign that says "there but for the grace of God go I" .

The Pocketbook Aqua is All Wet (video)

That’s an interesting device Nate. Why did you buy five of them?

I knew I could sell off a couple and recover my costs. Also, the auction for a single Pepperpad ended up closing for more than my set of 5.

I remember the PPad. Tried to test it extensively at their booth at a NYC trade show and got yelled at. Where are those smug shits today? Starving, I hope!

Shortly after that the Project Origami stuff started coming out. Samsung eventually wound up with a PPad-like design too:

What frikkin dogs all of the UMPCs were! Too thick, too heavy, and XP was just hell like that.

MS had the vision for the iPad — it just didn’t have any software to actually *do* it.

UMPCs did suck, didn’t they? You gotta wonder why MS tried to force Windows XP on to a mobile device rather than use their mobile OS (Windows CE). It would have worked much better.

You should post a picture of that next to an iPad and Kindle Fire too.

I’m having trouble uploading stuff to the blog. Here’s a couple photos on Flickr:
http://www.flickr.com/photos/[email protected]/7514164836/in/photostream