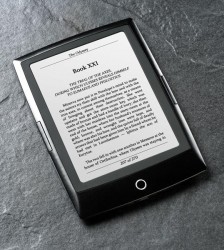 The French ebook reader maker Bookeen have just popped up again after several months of quiet. Now we know what they were doing while incommunicado;  it’s called the Cybook Odyssey.

Bookeen hasn’t released all the details yet, but they did say that the Odyssey  is equipped with a 6″ Pearl E-ink screen (with a touchscreen), Wifi, a web browser, page turn buttons, and it’s running on an 800MHz Cortex A8 CPU. The Odyssey is due to launch in Europe in the next few weeks, according to Bookeen, but the exact retail price has not been set.

The touchscreen tech isn’t named, but I suspect that the Odyssey uses the Neonode zForce touchscreen that has proven so popular on the Sony Reader, Kindle Nook, and Kobo.

This is Bookeen’s 4th ereader, and this time around we’re in for a treat. Bookeen have been mostly silent for the past year or so because they were working on increasing the refresh  rate of the E-ink screen and it looks like they might have really pulled something off here. They posted a demo video all the way back in February which showed off video, and then in May they demoed scrolling on an E-ink screen.

The video ability is old hat now, but I’m still impressed by the scrolling. That could be incredibly cool, assuming it’s fast enough, because it means that the E-ink screen is one step closer to being a functional replacement for a tablet screen.

Bookeen are getting more and more impressive as they get older. Their first ebook reader was the Cybook Gen3, which was based on the original and outdated Netronix design (it looked much like the original Kobo). Then in 2009 Bookeen released the Cybook Opus, a lighter and slimmer model with a 5″ E-ink screen. 2010 saw the release of the Cybook Orizon, which had a 6″ Sipix screen, capacitive touchscreen, and Wifi.

We don’t know the full details on the Odyssey, but I’m looking forward to finding out.

—
for more ereader news, subscribe to the RSS feed or the daily email newsletter.

Cybookpus? Was that the cute, furry one, or the tentacled, cephalopodish one?

Alas, I 'm sure you meant the Cybook Opus.

Thanks for the info, I’ve been waiting for that reader for ages! I do hope it is the perfect (for me) e-reader it looks like it could well be…

How do you know it’s a Pearl E-Ink screen, though? Their blog (http://bookeen.com/blogfr/bookeen-oddyssey-cp01/) doesn’t say anything about that, and it’s not even clear that HSIS is an E-Ink technology.

Their blog says "E Ink®", which confirms that it is E-Ink (e.g. not SiPix). Pearl is a reasonable assumption, I don’t think anyone is driving Vizplex with an 800 MHz SoC.