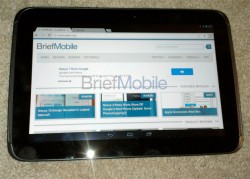 I’m sitting in the airport, waiting for my flight, and I just read that Google has canceled a lot of bloggers' travel plans. They were supposed to be holding a press event on Monday in NYC, but thanks to tropical storm Sandy heading in the general direction of NYC, they chickened out.

I’m heading home via Dulles, so I am safe. But Google’s cancellation does create an interesting situation in gadget news. It means that the leaked Nexus 10, the Nexus 7 3G, and misplaced-in-a-bar the Nexus 4 smartphone won’t be launched a couple days from now, putting the gadgets into a strange kind of limbo.

We all know they exist, and Google knows we know, and yet no one is supposed to know that we know that they know. You know?

Metaphysical crisis aside, I’m deeply curious as to whether Google will still announce the products on Monday.  They might not have a choice; I figure at least one of the partners will not get the message and post the press releases anyway. That could result in Google being in a position similar to Pocketbook and Qualcomm at CES 2011.

Pocketbook accidentally released their CES 2011 press release early, and it included mentions of the Pocketbook Mirasol eReader. That device ended up never being released, but at the time everyone thought it would be announced eventually. For some time during 2011 I amused myself by asking Qualcomm and Pocketbook about it just to hear their denials.

And we could see the same from Google. Now that would be fun.

Amazon Invests in Foxit (But Did Not Buy the Company)

Since NYC ordered evacuations are they "chickening out" also?

I have been through a couple hurricanes, several earthquakes, and more tornadoes than I can recall (I’m from the midwest). Running away from a storm is chickening out, yes.

And yes, I see the battle of man vs nature as being a game of chicken. I don’t blink.

People responsible for the safety of others cannot afford childish games…
Anyway, your mother probably forced you into a cellar.

It seems not everyone gets my sense of humor.

For the record, both the comment above and calling Google chicken in the article were meant as a joke.