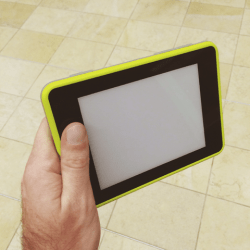 The Earl back country tablet has gone through many changes since it first launched as a crowd-funded project in May 2013.

It lost the kickstand in the original designed, gained and lost an antenna, switched from an LG Display-made screen to a Mobius E-ink screen, and as a result looks nothing like the original design. That’s why I am thrilled that I found a video today which shows off the latest prototype.

The following video may have been shot in the dreaded portrait orientation, but it does offer us our first look at the new Earl. This tablet is built around a 6″ Mobius E-ink screen with frontlight and touchscreen which has been wrapped in a rugged and heavy ( >1 lbs) shell with a rear-mounted solar panel.

As you can see in the video, the Earl runs Android. The listed CPU is a dual-core 1GHz Freescale CPU, which will come with 1GB RAM, 16GB internal storage, Wifi, Bluetooth, NFC, GPS, and multiple sensors. 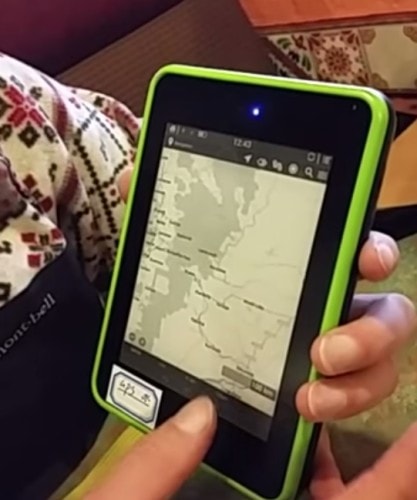 The Earl is primarily intended as a tablet for outdoors types, and that’s why it needs a rugged case, long battery life, and a decent map app. Much of the video is given over to that map app, which is coming along nicely. The app is being customized to work well with an E-ink screen so a user can scroll around the map faster and zoom in and out without a lag.

The Earl developers are also promising to release an API which 3rd-party developers will be able to use to improve the performance of their apps on the Earl.

The tablet is expected to be released later this year, close to twy years after the original release date. You can pre-order one on the Earl website for $299. This price includes a removable antenna and maps which cover North America.

Your Kobo eBook Reader Has Been Eaten By a Grue

Chromebooks Outsold iPads in US Schools in the 4th Quarter

When a see in the market… i believe in Earl