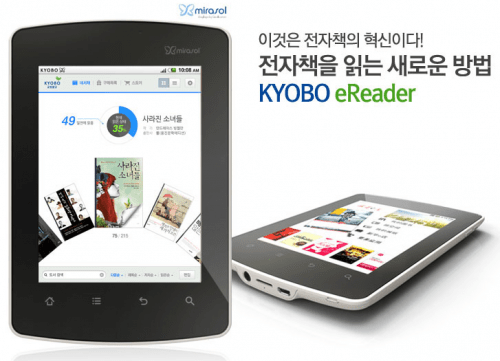 It looks like that report of Mirasol being delayed until 2012 was an error. Kyobo, South Korea’s largest bookstore and ebookstore, has just unveiled their new Kyobo eReader. Yes, that is the Mirasol screen you see on the device. 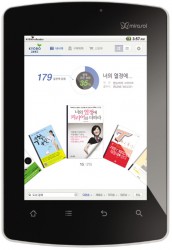 This is the 5.7″ screen that Qualcomm has been working on for past several years, with a resolution of 1024×768. The Kyobo eReader is running a locked down version of Android 2.3 on a 1Gz Qualcomm SnapDragon S2 single core CPU. It has Wifi, touchscreen, and card slot.

Kyobo will be supporting the Mirasol eReader with a 90 thousand title ebookstore as well as video lecture content from EBS, a Korea-based provider of educational material.

The Kyobo eReader is going to retail for 349,000 won (~$305 USD). Kyobo Platinum Book Club members will be able to get it at a discounted price of 299,000 won (~$262). It’s selling today in SK, but there’s no info on when Qualcomm’s other partners will launch models in other parts of the world.

. Kyobo is a Korean company and i doubt they are interested in outside markets. They have 10 stores in 7 cities (I’ve heard of them before), so they look to be busy with dominating the one market.

Update: I’ve changed my mind. Given the Qualcomm CPU, screen, and the fact that Qualcomm has previously developed Android OS firmwares, I think that this model could have been designed by Qualcomm. That means we could see other partners using the same general design.

But I am expecting to see it at CES 2012. Qualcomm will definitely have this in their booth.

BTW, this launch comes as a slight surprise (considering my post this morning) but it also comes as no surprise. I’ve seen an uptick in stories about Mirasol screen tech lately so I suspected a launch was happening soon.

And would you look at the price? It’s selling for $300. I think I was right about the problems this screen tech will have in the US market; I can get a Kindle and a decent tablet for that price.

Update: Qualcomm updated the Mirasol website with more info on the device. Check it out. There’s even a couple demo videos and they are worth watching.

Update: They also posted a few photos on Flickr.

Yeah, $300 is a lot for an eBook-only device, but this could probably be rooted like a Nook Touch. In fact, maybe we’re seeing a glimpse of next year’s Nook Touch. By then, maybe it’ll be US$199 or even US$150.

I know these are low power. I wonder what the battery life is? If it last for two weeks on a single charge, then it might be worth the steep price if it were bigger. 5.7 is smaller then the 7" I already have a hard time with as far as typing and pressing what I meant to press.

This tech, in a smaller screen size, could be the ticket for cell phones though. My Android is horrible on battery life and needs all the help it can get.

I was impressed with the video that showed unsimulated screens. The price may be high, but I’d be willing to spend it, just as I spent $300 on my Sony 950 and $300 on my Sony 505 (bought before they started dropping prices) without hesitation or regret.

What will ultimately determine my willingness is whether these devices — or devices with the Mirasol screen — are dedicated ebook devices or are low-end tablets. If low-end tablets, then I’m not interested; I don’t want the "experience" of being able to surf the Internet, read my e-mail, update the last memo I wrote, etc. I am looking for something that gets me away from my computer — untethers me from my workday — which is why I really like my Sony 950. It makes book reading a pleasure without any of the side distractions.

The way I read the (low volume) South Korean pricing suggests it could launch at $249 in the US and $199 might be reachable by Amazon or B&N.

As to the Android underpinings; whether one cares about using it as a webpad or not, *open* Android tablets are as close to Universal ebook readers as is possible today. Being able to access all the major ebookstores in one device is justification enough.

But in the end, battery life and weight will be key: otherwise, why bother? It has to compete with well-understood LCD tech so it needs to be noticeably better in both areas.

The only way I expect to see it for $250 in the US is if someone wants to lose money on it.

Maybe, maybe not.
They’re selling it for $260 to their Club members, no?
And the sales volume for this product is going to run in the thousands, not hundreds of thousands. Plus the thing has front lighting (just like the Sony PRS-700) so removing that should bring costs down a bit. Ergo, $250, at current volumes is doable.

It’s pretty clear they’re just starting to ramp up production (and Qualcomm is likely losing money at this volume) but once they have their production line debugged and start hitting volume production (second half of 2012 now sounds actually credible), one of the big boys could easily hit the same price as Kyobo and even go lower.
And, in fact, they would *have* to.

My rule of thumb, for what it’s worth, has been that this year’s fire sale (uh, no pun intended) and refurb pricing is *next year’s* mainstream pricing. With the halfway-decent generic Android webpads currently clearing out of the Kindle Fire pricing zone, into the $99 range, I would expect any that remain on the market by next summer will be running closer to $99 than to $199. Factor name-brand and battery life premiums and $249 is about as high as I see the market bearing in any kind of volume.
Plus, and this is key, Mirasol is running late; they need to make up for the lost 2011 sales so they can’t afford a slow ramp-up in 2012; they need a big splash. Ideally, something like the 4-6 million Fires to be sold over the next few months.

A color (Mirasol) Kindle at $250 would sell at production capacity; at $300, doubtful. Not in 2012. Not once the full impact of Fire on webpad pricing is factored in. Ideally, they need $199 to drive the tech mainstream.

And remember, it’s not just LCD webpads Mirasol products will have to match up to. There’s also Eink.
*Both* have a rough fight ahead so unless they want to fade into nichedom (which Qualcomm’s alleged billion-dollar plannt investment argues against) they need to hit competitive pricepoints ASAP.

True, Amazon could launch a $250 Mirasol device just to lose money on it. But even if Amazon priced it at $300 I think they’d still be losing money on it.

Could be.
iSupply breakdowns won’t tell us much about what Qualcomm’s cost and pricing is like.
I just don’t think anything higher is going to work. LCD is a monster to match up against.

And for the first small, buggy production run that’s the customer base anyway.

Then, if the tech is any good, Amazon will adopt the technology shortly after and be forced to sell at a loss in order to undercut whoever got there first.

Having now had some sleep, the other question surfaces: Where the hell is Pixel Qi?

I just had a co-worker leave for South Korea the day before this came out.

Not sure if they’re able to sell this in high volume.

[…] elusive Mirasol screen has shown up on a Korean ebook reader. Will it come to the US? Supposedly in 2012. Share Me:EmailPrintRedditStumbleUpon Tagged with: […]

[…] Kyobo eReader is being sold in South Korea by Kyobo, a bookstore chain with 10 stores in 7 cities. Click here for more […]

[…] you seen the new eReader with the Mirasol epaper screen? It was launched just a couple weeks back in South […]

[…] is already on one gadget, the Kyobo eReader. This device has a 5.7″ screen and is marketed as an e-reader by Kyobo, a South Korean […]

[…] already covered the details of the Kyobo eReader (price, specs, and content) before, so I’m really just interested in the screen tech. I turned off the […]

[…] I posted a couple hands on videos of the Kyobo eReader. They were shot by bloggers who had the good fortune to be at a conference at the same time as a […]

[…] been just over a month since Qualcomm and Kyobo launched this e-reader in South Korea, and I have finally managed to buy one. But I’m not going to review it just […]

[…] This device is built around a 5.7″ Mirasol screen, and it runs a custom reading app on top of Android v2.3.  This ereader is Qualcomm all the way down to the 1GHz SnapDragon CPU. (Well, that answers one question; this hardware is clearly a reference design originally developed by Qualcomm. That’s what I had guesses when the Kyobo was first announced.) […]

[…] in the world to carry an ereader or tablet or tablet with a Mirasol screen, and they launched it in late November 2011. It generated a lot of attention at the time, but the excitement started dying off shortly after I […]