Google Is Deeply Afraid of Amazon 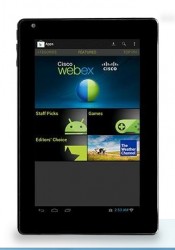 A press release came across my desk today for another new Android tablet. I don’t usually report on all of the product launch emails I get, but this one is particularly interesting because of what is says about Google, Amazon, and the Android ecosystem.

E-Fun announced today that they are launching a new budget tablet, the Nextbook Premium 7SE-GP. In spite of the name, this is a rather ordinary device which runs Android 4.0 ICS on a 1GHz single-core CPU. It has a cheap 7″ screen and otherwise unremarkable specs as well as an unremarkable retail rice of $129 (shelf price will likely be $99).

I usually don’t report on tablet launches (there are so so many), but I’m making an exception in this case because this tablet signifies a change in the market.

This is the first tablet from E-Fun which ships with Google Play.

E-Fun is a budget tablet maker, and for as long as I have known them they have never released a tablet that shipped with Android Market or Google Play. As I understood it, E-Fun’s tablets (like many other budget Android devices) didn’t meet certain minimum requirements for Google to allow the tablets to have access to the Android Market.

E-Fun’s tablets have been consistently cheap and underpowered for a couple years now, only now that no longer seems to be an issue for Google. Now Google is willing to let E-Fun into their exclusive club.

This could just be wild speculation on my part, but it is my guess that Google is beginning to be very afraid of the Kindle Fire. That is something which I have been pondering for a while now, and the E-Fun news today is merely one more piece of evidence proving it true. Past evidence includes the Kobo Vox and the Nexus 7.

Several months back Kobo announced that the Kobo Vox, their lackluster Android tablet, got a free update which added Google Play. The Vox had specs not too dissimilar from the Nextbook Premium 7SE-GP mentioned above, so it came as something of a surprise at the time that Google would allow it to have such a coveted prize.

And then there’s the Nexus 7. Did you ever wonder why Google felt the need to release such a powerful tablet at such a low price (same as the Kindle Fire)? They undercut all their current hardware partners, which is a big no-no. Pissing off the manufacturers which make most of the Android phones and tablets is a terribly stupid move – unless it is the lesser of two evils.

It’s my guess that Google is worried that Amazon could be making more Kindles Fire than anyone else is making genuine Android tablets.  Or at the very least Google is afraid of the appearance that Amazon is out-selling everyone else.

I would hope I’m right, because that would mean that more and more cheap tablets will be shipping with Google Play, making them easier to use. It’s also going to force Google to find a way to compete with Amazon, and that will also be a good thing for consumers.

Then again, there are other possible explanations. I just can’t think of any one which fits the evidence better.

Wow, this is very interesting. I have noticed that Google’s list of supported devices has been steadily growing over the past year. One could attribute this to the growth of the Android OS or consumer interest in tablets, but, until recently, I always thought that Google certified devices had to have higher spec standards.

Over the summer I remember Archos announcing that more of their Kmart/Sears/QVC-distributed tablets would be getting the Play Store and ICS updates. I thought the reason why budget tablet users had to suffer with oddly-named sub-Android markets was because the devices themselves were of lower quality.

You might be on to something here if this pattern continues. I’m sure Google wants the Play Store to be available on as many tablets as possible in order to compete with the big A. They need more revenues from music, eBooks, and videos to make inroads. I have only purchased one eBook from the Play store, and that was because I had the Nexus 7 credit 🙂

I missed the Archos news at the time. Interesting.

Now that I’ve read I’m not sure both of the tablets mentioned qualify as budget devices, but the Archos 97 Carbon does. It has a single core CPU, much like the Nextbook mentioned about.

Google may or not be afraid of Amazon…
…but they *should* be.
They are a very "bad" example for other android device vendors. The last thing they want is other vendors forking the GUI or the appstore…
Or worse, the phone carriers getting into the act.

Putting the Play Market on a device isn’t only about the specs of the device; there are also licensing fees involved. Also, the certification process takes time, giving competitors a chance to beat you to the stores. Given that the margins on low-end tablets are razor thin, I’m not surprised most manufacturers skip the Market.

Right now, we’re still at the beginning stage of tablets. Most customers are buying their first tablets, and many of them don’t know what Google Play is or why they need it. They assume that any tablet include the "app store". More manufacturers will start trying to get the Market, when customers start demanding it.

You raise a good point. Google is desperate to gain traction with Google Play. In a similar fashion, I am willing to wager that the announcement by Verizon and HTC to bundle Amazon’s app suite in the Droid DNA surely must have Google worried.

"I am willing to wager that the announcement by Verizon and HTC to bundle Amazon’s app suite in the Droid DNA surely must have Google worried."

The obvious reason is money. The more tablets with Google Play installed on them, the more money Google makes. That’s why the Nexus came out. So Google can make money off the customers.

[…] It’s also one of the best and most preferred retail apps. It’s not without reason that Google is afraid of Amazon. If Amazon becomes the biggest store in the tech world, people will not search the stuff they want to buy on Google anymore. They will go directly to Amazon. In view of the fact that Google makes money from advertising, not from search, the success of Amazon could be a big problem for them. You can find out more here. […]

[…] reminded us today why they are likely feared by Google. They just announced the expansion of the Amazon Appstore to Japan.Amazon's Japanese customers will […]