Apple has just handed us a graphic reminder of the value of a closed ecosystem vs open.

9to5Mac reports that the latest stats from the iTunes App Store Distribution data show that iOS 8 has been installed on 72% of all active iDevices. 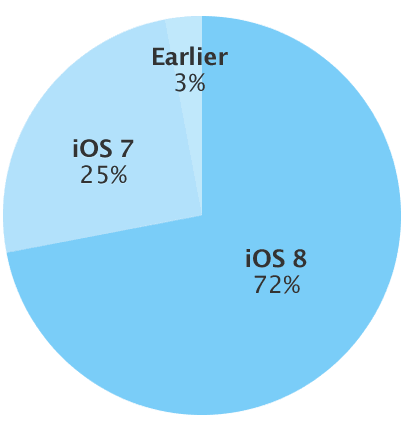 iOS 8 had been released just over 4 months ago, and while that adoption rate lags behind the rate noted for iOS 7 it nevertheless is a far higher rate than what Google is reporting for Android 5.0 Lollipop.

It’s been some 3 months since Google officially launched the latest version of its OS, and so far it is only running on 1.6% of the devices which visited Google Play over the past week. That is far smaller than the share for Jelly Bean (44.5%) or KitKat (39.7%).

Android has always lagged in terms of adoption so this should in no way surprise anyone. It’s simply one of the downsides of having an ecosystem with dozens of suppliers, all competing with each other to release new devices.

Few of those companies can afford to keep up with the latest version of Android; they’re too busy building the next model. And to be fair, the only reason Apple can afford to release a universal version of its mobile OS is that it charges a lot (they can do that without any real competitors).

As with any system, there are tradeoffs. Do you want high prices and a high expectation of quality or low prices and middling quality?

Me, I’m happier with the less constrained, hit-or-miss world of Android than I am with the locked down, costly, Apple ecosystem.

Yotaphone 2 launched, Could be coming to the US next year (maybe)

It’s not that simple.
Google gives early access to the new OS to a few entities, Mediatek for example is not one of them , last year they shipped some 350 million smartphone SoCs.
So most have to wait for the source to be posted and then they can start working on getting it running on their devices , customizing it ,testing so it takes time and Google isn’t helping by giving selective early access to a few ,some of them with minimal relevance today.
Another major problem are the carriers that in some parts of the world need to test and add their own spyware and bloat.
Google could do more, could be more open, could prioritize who matters at a global level instead of just a few that have close relations with them… Don’t know if Google cares anymore, about anything , if they have any strategy or if they are trying ,they might be lost in dreams of grandeur.
Right now the ones with early access are starting to update, even Google’s Android One is yet to get Lollipop.

Proud member of the 3%! Still using my iPad (1) with iOS 5 and no camera or location services to get hacked.