The market research firm Strategy Analytic have released their estimates for world tablet sale for Q2 2011.

Much to no one’s surprise, Apple reportedly sold 9.3 (ish) million iPads last quarter, and they captured over 60% of the market. Android tablet sales came in a distant second, with around 4.6 million units sold. Of course, the really surprising numbers was the bump in Windows tablets, and that they outsold the BB Playbook. That’s not what I was expecting.

The global tablet market is estimated to be 330% larger this past quarter than it was last year (3.5m vs 15.1m units). But if you look at the numbers, you’ll see that Android tablets are quickly catching up to the iPad; their growth was over 4,000%. And no, that is not a typo. Android tablet sales increased by over a factor of 40. 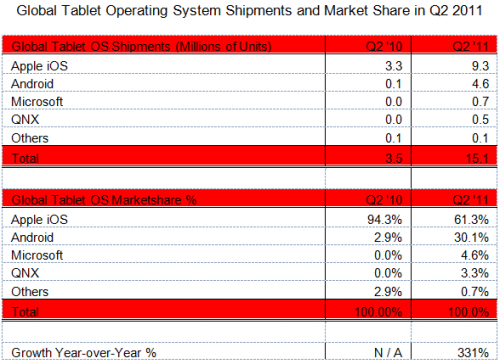 Infographic: Who’s Tracking You Online, and How to Fight it