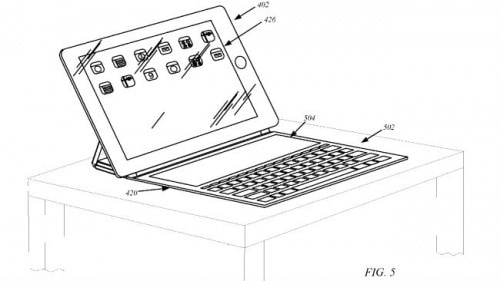 There’s a set of drawing floating around the blogosphere today. As you can see in the graphic above, Apple’s been thinking about a new concept for the Smart Cover which debuted with the iPad 2.

The new cover shares a number of ideas in common with the MS Surface tablet’s cover. It’s going to be an input device, only Apple’s concept integrates a second screen, and depending on how you hold it the contents of the screen could change from a keyboard, sketchpad, and more.

Has anyone figured out why Apple released these details? It’s not in their nature to tell anyone anything. 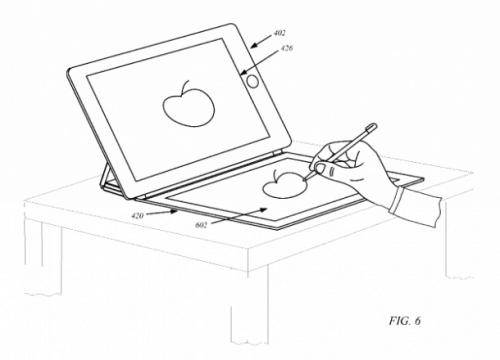 Companies usually keep patents quiet because they don’t want to give away ideas. Secrecy is the best way to release a product before the competition has a chance to copy the features. And given the fact that Apple is very secretive, you know they wouldn’t share any details if they were still planning to release this accessory.

At least, that’s what I’d think in the case of most patents, but with this patent I am not nearly as certain. I have a feeling that this patent paperwork only went public because of the Microsoft Surface. That tablet is also going to have its own Smarter Cover (with integrated trackpad and keyboard), and I could easily see Apple deciding to play a game of one-upsmanship. This patent was filed last year, so I wonder if Apple might be trying to make the point that they thought up the idea first. 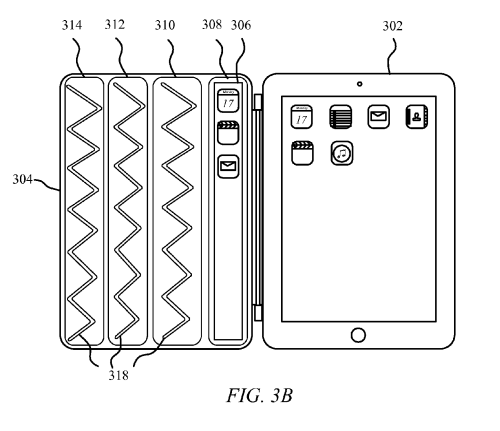 This might simply be a case of someone inside Apple deciding to show that they’re smarter than Microsoft. Pride, basically. And that little twist to the story is enough to make me less than certain whether we’ll see this concept show up as an Apple product.

And I’m hoping that it does get released (perhaps even with the iPad Mini). this would be a useful tool. In any case, as cool as this would be from Apple I expect we’ll soon see an aftermarket product that is about 2/3 as cool as Apple’s concept. That might be good enough.

Is There a Future for Illustrated E-Books?

Don’t worry, now that the idea is out there, I’m sure Samsung will make it…

The Paranoid in me says Apple is making any idea that crosses their mind into patents, even if they never plan on actually making it. This way, they can sue anyone who attempts to, or cry "we thought of it first, pay up".

Well I created desfigns for a skin and cover using Microsoft Sideshow tech in 2005 that incorporated an eink display for use as an ereader. I also have designs from that time basically notification displays for stocks/news/appointments etc all enable by Microsft SideShow. Some oem companies showed embedded secondary displays and others add-on accessories like my ideas. Sideshow never got any real traction but this idea from Apple is clearly its descendant.

I even have one design from then for a device with 6 inch display of either eink(for battery longevity) or LCD (for color/video) that would be undocked from the main pc/laptop . ITs basically a TVguide remote that would use the Sideshow api to send the TV guide info from the PC to the device and then allow you to select the program you want to watch/ record etc.

It was too expensive to produce then as it would have cost about $300 retail but now of course we have all that same functionality with an Android or iOS app.

Which goes to the heart of this idea- people dont really like to pay 300 for a secondary display that cant be used standalone. At least in my experience.

Apple won’t be releasing this cover any time soon if ever.
The image that shows it working with a stylus guarantees it won’t see the light of day.
After Newton, ink as a data type is a no-no at Apple.
Plus, MS owns most of the key patents for ink data. 🙂

I don’t know, Apple is being adopted by enterprise. I don’t know how much longer they can avoid offering a native digitizer. Besides, it was Steve Jobs that was against a pen. He was also against using celebrities in commercials. Look how fast that went out the window after his death.