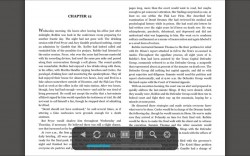 It’s been just over 3 weeks since the Kindle for PC app was last updated, and today Amazon released a new version of the Kindle for OSX app that adds all the same features.

K4OSX finally got support for Amazon’s PDF format, Kindle Print Replica. Along with KPR it also gained support for DRM-free PDFs (most, anyway). The app also now has support for the same 5 languages as the K4 and the iPad app (English, French, German, Italian, Spanish, and Brazilian Portuguese). And even though I know I’m beating a dead horse, I think this means that Amazon will open local Kindle Stores in the latter 3 markets.

Perhaps the most fun feature is the new Shelfari support. This was first mentioned at the Kindle Fire launch. Do you like to look up historical info related to a book, or perhaps read a character summary? You can do that now. This update integrated user generated content on Shelfari. If someone filled in the data then you’ll be able to retrieve it from K4OSX.

If you’d like to try it yourself, you can find the Shelfari search under the more option (along with Google, Wikipedia, and dictionary). Curiously enough, it does not appear to need an active internet connection. I had heard that Kindle ebooks were supposed to have a new sidecar file with this info; it looks like that was correct.

This is a very nice set of features, but did you know what is missing?  (Well, it’s not missing so much as it wasn’t included yet.) The K4OSX app didn’t get the Kindle Cloud support that Amazon promised all the apps would be getting.  I didn’t expect to see it, TBH, but I just wanted to give you something to look forward to.

Never Write for Exposure, and Other Illogical Advice