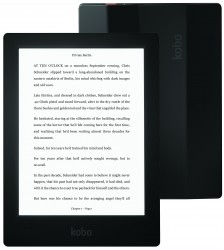 Kobo is notorious for poor warehouse management so this next piece of news should be taken with a grain of salt.

A reader has tipped me to the news that the Kobo Aura HD, the 6.8″ ereader which Kobo launched in the summer of 2013, is now out of stock at Kobo. (Thanks, Phil!) This follows only a few weeks after a similar report that the Kobo Glo had also gone out of stock.

There’s been no official statement from Kobo on the matter, but some are speculating that this could be a sign that both models have been discontinued.

And they might be right (or at least, I’m hoping they are). We’ve known for about a month now that Kobo had used a couple new device codenames in its latest firmware update, and it looks like Kobo may be thinning out their lineup to make room for the new models.

If that’s true then Kobo is planning to release a couple new ereaders early this year, one with a 6″ screen and one with either a 6″ or a 5″ screen.

Early last month inquisitive Kobo watchers took apart a Kobo firmware update and discovered mentions of Pika and Alyssum, two new codenames for what everyone is assuming are a couple new ereaders.

After a long debate, readers convinced me that Alyssum probably refers to a device with the same screen as on the Kindle Voyage (I was betting on a 6.8″ screen, but not any more). It’s not clear what size screen the Pika device will have (both 5″ and 6″ are a possibility) but I think it is safe to assume – for now – that it is designed to be a budget model.

Kobo is now down to selling 3 models, at three price points: budget, mid-range, and premium. They have their bases covered, so there’s no clear need to release new hardware. And with a penny pincher running the show at Kobo, there’s every chance that the new models are nixed as a cost-cutting measure.

Update: A reader noticed that the Kobo Touch was out of stock at Kobo.  If that is a permanent state then it increases the chances we’ll see new hardware this year. Thanks, Fbone!

As with Kobo’s last hardware launches, we’re going to have to wait for the new models to show up at the FCC, or for more details to leak, before we know for sure.

When Did the Quality of Baen’s eBooks Start Sucking So Bad?

I hope they improve the software while they are at it. The Nook was ahead of the last Kobo I bought.

Really? I’m reading on the Aura HD at the moment, and it’s okay.

Love my Aura HD. It makes me sad it’s discontinued, because if it breaks I’ll have to replace it with something else. There’s H2O but I prefer Pearl to Carta.

I just bought a Kobo Glo refurb to replace a Nook Simple Touch with Glowlight, and at least in the first two weeks, I’m really impressed with the Kobo. It really seems well-designed for people who are really interested in reading.

Yeah, I thought Mike was a little nutty when he wrote that.

I only see 2 models for sale at Kobo; the Aura and H2O.

Well that’s interesting. It was showing as in stock when I wrote this post. Thanks!

Let’s hope that finally one manufacturer presents a serious attempt at a premium small-size reader (5″ or less), for the last small devices we had were the Kobo Mini (Visplex, no front-light screen, no SD-card support, software limitations compared with Touch and Glo), PocketBook Mini (no front-light screen, no touch screen) and the Pyrus Mini (no front-light screen, no touch-screen, no WLAN, limited software), neither of which could be considered as competitive with the similarly priced larger-screen devices at the time that they were sold (except perhaps the Pyrus Mini, which was indeed competitive in price and a really nice reading device, but alas with too limited software for anything non-plain text).

To date, there is still nothing on that front. Obvious possible improvements over previous devices: Carta display, front light, Bluetooth, all the things that individual previous devices were lacking (WLAN, SD-card slot, touch screen, unlimited software), and what have you?

I’d like to see one, too. For example, I’ve always liked the design of the Pocketbook 360, and I wish it had been updated with a frontlight, touchscreen, and higher resolution screen.

Coincidentally, there is a 4.3″ epaper display with a resolution of 800 x 600. Kobo could be using that screen, but this is just wild speculation (which is why I left it out of the post).

I want a 5″ reader WITH FRONTLIGHT so bad and there is NOTHING out there!
I would be willing to pay a very high price considering the fact that it would be the only one….

I would love to be able to put it in my wallet and take it with me everywhere and know that I could read at anytime with or without having lights around me or carrying around a stupid clip on light!!!

I would hope that Kobo will have a bigger screen , such as the 6.8″ screen, available in as inexpensive a reader as possible. I don’t need a waterproof e-reader, such as the Kobo H2O. Bigger screen are a big help for PDFs. It is good to have competition for Amazon, so keep it up, Kobo.