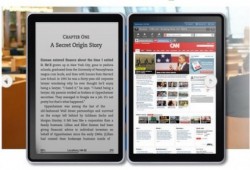 I’m only repeating this rumor so I can snicker at it, loudly.

According to the ZatzNotFunny blog, they have a source who sat next to an unnamed Amazon exec on a flight somewhere. This Amazon exec is supposed to have said  a few things about the new Kindle tablet:

Most notably that it features two displays: e-Ink on one side, color LCD on the other. And he seemed quite clear that this is front and back, versus the stacked displays seen on the original Barnes & Noble Nook or a dual mode screen, à la Pixel Qi. Which sounds pretty far fetched… How thick would the device have to be to support two screens and reasonable battery life?

Dave Zatz didn’t believe this rumor, either, which is to his credit.

This is a rumor that you can write off as an impossibility. We’ve seen 3 dual screen ebook readers come and go over the past 18 months. All were failures, and 1 never even made it to market. Not even Amazon could succeed after 2 other companies failed. Heck, I’m not sure that Apple could pull off a success for a dual screen tablet. Also, there’s no way that this would be cheaper than the NookColor.

I’m sure Amazon played with the concept, but I don’t see how they could plan to release one.  As much as I like the idea, a dual screen tablet proves the rule "jack of all trades, master of none". You have to admit that a dual screen tablet will not be better as a tablet than a single screen Android tablet, nor will it be better than the Kindle as a reading device. Do you think Amazon would want to make a second rate device?

What I think is more likely is an LCD and eInk hyrbid.

"Jack of all trades, master of none." Man, they mastered the e ink, certainly. I wouldn’t believe such a rumor but only because of how it was heard, supposedly. Can you imagine a neon tablet with e-ink? I can. It would be a simulated e-ink, probably. I just don’t know why they would want to do that when they can just utilize their own app technology.

Well, the individual’s role in the company was revealed to me along with some additional product information. But on the off chance he is who he claims and he understood what he was looking at, I’d rather keep those details quiet for now. They don’t add much to the most dramatic part of the story and would potentially land him in hot water (especially if he misunderstood what he saw?). As for me, I have no need for a dual screen device. However, a dual MODE screen, appeals.

Oh my god. Bezos would call that the Kindle +1.

The report may not be all that wrong.
It may simply be that Amazon is developing a tablet that can in fact drive an eink panel and an LCD using the same motherboard, firmware, battery, etc. And, while unlikely, it is not impossible that they might have a double-sided prototype for quick comparisons. Just not meant for production; the production run would simply ship with one screen or the other.

It may also be that someone at Amazon (Bezos?) is having a bit of fun off the rumormongers.
I know I would if I were him. 😉

[…] The i.MX50 family of chips  is based on a Cortex A8 CPU, with a base speed of 800MHz and a NEON co-processor. Two of the chips, the 507 and 508, will have have the new support for E-ink screens integrated into the chip. They will also be keeping support for LCD screens, so what we have here is a chip that could drive a dual screen tablet (like the mythical Amazon tablet I mentioned yesterday). […]

[…] that doesn’t mean the idea was bad. Also, Amazon was rumored to be working on such a device last year.Each side of the new Kindle Firewill be driven by a 1.3GHz Tegra 3 CPU and will include the 42MP […]

Dual screen it would be excelent for all our needs.

I read much and prefer even eink for reading all: book, internet pages, emails, writing texts and so on.

By the way, where are the eink monitors?