E-ink got a lot of press the week before last with the announcement of a couple new shelf label systems, but they’re not the only ones taking this screen tech to places you would not expect.

While I was in Vancouver for SID Display Week I spent a few minutes with Peter Slikkerveer of Mpico. He was showing off the prototype for a new epaper label system that could potentially replace smart cards and luggage labels. These new labels are wireless, battery-less, and have a screen which can be updated remotely.

I met the Mpico rep at the Innovation Zone, an area set aside for single table demos. This company has developed a way to integrate a small E-ink screen with RFID chips.

An RFID tag is a tiny chip that is both read and written via a remote scanner. Have you ever simply waved your credit card at a scanner in order to make a payment, or gotten an E-ZPass for paying tolls on highways? That credit card, and the E-ZPass transponder, have RFID chips inside. If you’ve ever chipped your dog, then that dog also has an RFID chip inside.

As you probably know, an RFID chip is read by a remote sensor that transmits a signal to the chip and reads the signal that RFID chip sends back. Mpico has come up with a way to use the transmission from the remote sensor as a power source for an E-ink screen. 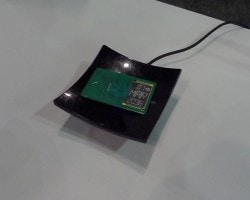 They had a number of different prototypes on display in Vancouver, including both long range and short range solutions. The short range would work best for smartcards, while the long range could be adapted to work on luggage labels and other places where we currently use disposable paper labels.

The smart card prototype (and requisite sensor) is at right. It doesn’t look like much at the moment, but that’s because this is a lab prototype, not a pre-production unit.  Naturally it’s a lot sturdier than the card which would be used by consumers.

It has a 1.5″ segmented E-ink screen which can display a date, and is really only intended to show off the idea. It would also be possible to instead give this smart card a different screen – perhaps one that could show the amount of credit left on an account.

The longer range solution is good to a distance of about 2 meters: 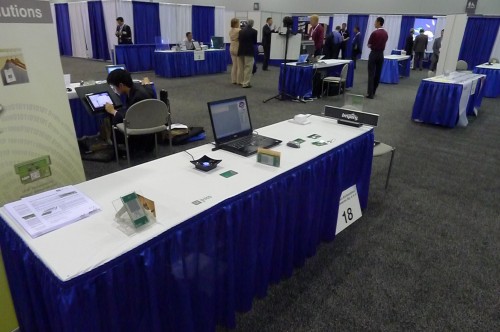 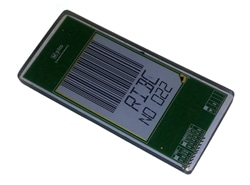 The black bar on the right edge of the table is the sensor, and the device on the left end of the table as well as the one in the middle next to the laptop are the labels.

Here’s a better view of one of the labels. As you can see, it shows a bar code, a 4 digit airport code, and a third line of text which can be adapted for a variety of uses (passenger name, for example).

Mpico is looking for a vendor partner that is interested in bringing this platform to market. Let’s hope they release it before Amazon debuts their own solution.

No, that isn’t just name-dropping; Amazon is working on a very similar technology.

Just over a couple months ago Amazon was awarded a patent for a wireless, battery-less ereader concept which received power and data from a remote base station. I didn’t think much of the patent at the time because I didn’t think a large E-ink screen could receive enough power to operate, but now that I have seen Mpico’s solution in action I am not so sure.

Amazon could indeed be working on a wireless, battery-less ereader for the academic market. If the screens are kept in the classroom and stored in a cart, that cart could also double as the transmitter and controller for the system. The screens could be passed out to students and then handed back in at the end of class.

Update: Mpico got back to me on the battery-less ereader idea, and they don’t think it’s possible either. The power requirements for say a 6″ screen are too high.

I still don’t think there’s much of a need for a battery-less ereader as an ereader, but that’s not the only thing Amazon could do with their tech. I would bet that Amazon’s solution could be adapted to serve the same purposes as Mpico’s labels. What’s more, Amazon has a direct interest in epaper labels. Can you imagine how useful this would be in Amazon’s warehouses? They could put a label on every single bin and update the label as the contents of the bin are changed.

Would anyone care to bet on which system is deployed first?

Surely a 6″ ereader could be powered by the same device that powers cell phones when you drop them onto its surface? So the class desks could have such a surface and that would handle the academic solution. With some sort of identifying and proprietary side to the charging tech, the ereaders would be no good if stolen from the school.

For home use, this answer seems less than ideal, since you would have to lay the ereader onto the surface.

I have long wished that some device maker would manufacture a tablet that has no battery, and instead just have a cord. The device could be bigger, thinner, lighter, more powerful, and cheaper than an iPad. The drawback would be wrangling the cord, of course. I would put up with that, but the manufacturers don’t seem to think most buyers would.

Sure, but the system you describe wouldn’t be able to also transmit the data from a remote location. It would just charge the tablet, and that is only half the trick that Amazon described in their patent.

E-ink is Working on a Turnkey Solution for Secondary Smartphone Screens | The Digital Reader 21 April, 2016 um 11:16 am

[…] in 2013 I showed a research project and a commercial prototype which used NFC or RF frequencies to power an E-ink screen. Now E-ink is developing a commercial solution built around a 2.9" […]

Intel Accomplishes the Possible: Powering an E-ink Display via NFC(video) | The Digital Reader 14 May, 2016 um 5:29 pm

[…] Remember that wirelessly powered E-ink tag system I showed you back in June? […]

[…] Remember way back in June 2013 when I showed you a proof of concept design for a battery-less E-ink screen powered by NFC? […]