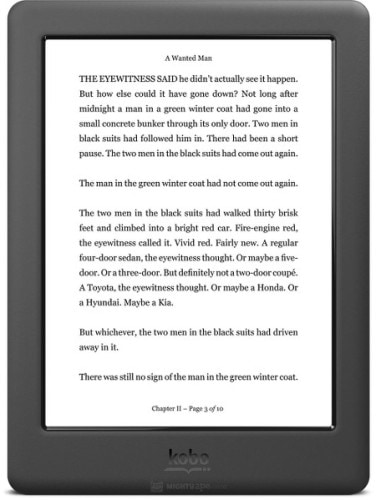 Hints have been circulating for over a month now that Kobo would launch an ereader this spring, and it looks like they just came true.

Numerous retail sites in New Zealand and Australia have leaked details about the Kobo Glo HD, Kobo’s next ereader. Sporting a 6″ E-ink Carta screen, the Glo HD is built to be a competitor to the Kindle Voyage.

According to the NZ retail site Mighty Apes, this device is set to ship in New Zealand on 1 May 2015, and carry a local price of $219 NZD.  Another source puts the Australian price at $149 AUD.

An earlier rumor said the US price would be $149, or about $50 less than the Kindle Voyage. I have no information on a US launch, but I would expect the Glo HD to ship in the rest of the world by the end of the month.

We actually know very few details at this time; in fact, I haven’t even gotten an invite to the launch event. But the leaked listings do tell us that the Glo HD will have the same 6″ screen as the Kindle Voyage, pack in both a frontlight and touchscreen, and ship with 4GB of internal storage.

Curiously, there’s no mention of a microSD card slot. While it’s possible that this detail was left out, there’s also a chance that the Glo HD doesn’t have a card slot at all.

This is a thin report, I know, but I can flesh it out with a few more details. After googling the model number (N437-KU-BK-K-EP), we know that the Glo HD will have an optional sleepcover.

I also discovered that Kobo leaked the FCC ID (NOIKBN437). Kobo hasn’t filed the FCC report yet, but what with all of the details and the video I am certain that they’re going to do so in short order.

The Glo HD is one of two ereaders which we expect Kobo to launch this spring. The other model, codenamed Pika, is going to be a budget model with a screen resolution of 800 x 600, and a touchscreen but no frontlight.

The latest rumor said that both models would launch by Easter. That hasn’t happened, but I do expect a launch this week.

" The other model carries the codename Pika. That unit is going to be a budget model with a screen resolution of 800 x 600, touchscreen, but no Wifi."

I think you meant "no front light"

Whoops. So I did.

If the Kobo Glo HD carries 300 ppi, then that would be comparable the Voyage; it is also seems to be priced at near $150, which is between the Paperwhite and Voyage. The Aura H20 is really on its own, as Amazon has nothing comparable to it. Are you sure the budget e-reader comes with no Wifi? Why would Kobo do that, seeing the shop is the way to purchase books to download.

I think Kobo aren’t going in the direction of Amazon (premium, mid-range and budget) but have their own selection – 6.8 inche e-reader, one higher-end 6 inch ereader and possible another budget one.

I really like the Kobo Glo HD advertisement (video) – it’s simple and informative. Compare this advertisement to the sentimental and overboard superlatives you get in a lot of other tech advertisements.

A shame, if this came without an SD card slot! What an annoying trend of manufacturers to deliberately cripple their devices for no fair reason.

From the pictures in http://www.mobileread.com/forums/showthread.php?t=258757, it looks like there’s really no SD card slot. Only USB.

I don’t think it’s clear in the images whether there is a card slot. On the other hand, the video doesn’t mention it. I think that detail is conclusive.

Besides, Kobo has been moving to tighten up their ecosystem and increasing reliance on kepub. Taking out the SD card is a step towards Kepub-only.
All they need now is an ADEPT epub to kepub file transfer utility to get rid of the adobe tax on the hardware side.

Right, not entirely conclusive, but at least this one doesn’t suggest one on the bottom: http://www.mobileread.com/forums/attachment.php?attachmentid=136818

This is interesting: Johannes of lesen.net writes in a post, that they could talk under NDA about the Glo HD with a Kobo representative for Europe, but they are only allowed to write about it by tomorrow noon (I guess, CEST, that is). Interestingly, he says, that the price will be lower than what current speculations suggest. However, I don’t know what "current speculations" he was thinking of at the time of writing his port.

The interview went public now. The separate news on the Glo HD too, but belated enough to have other sources having reported on price and specs earlier. The Glo HD basically seems to be the device that could be expected from the leaks, its price, however, tries indeed to be attractive.

It is attractive, yes.

Interestingly, there are now different prices reported. The earlier sources mention 129 EUR, Johannes reports 119,99 EUR for Germany at Media-Saturn. But we have to wait one month longer than you.

All this information surfaced on 31st of march. Doh !, How close this is to April Fools Day. Also why did it surface in the southern hemisphere, when Kobo is a Canadian company. I think we are all being fooled by this mythical product.

[…] First Glance at New Kobo Device (Ink, Bits & Pixels) According to leaked information purporting to detail Kobo’s forthcoming Glo HD e-reader—one of two the device maker is said to have in the works—the device will reportedly feature a six-inch screen and a $149 retail price-tag, putting in on a footing to compete with the Kindle Voyage. A launch is expected shortly. […]

[…] looking at the leaked images, the leaked quick start guide (PDF), and reading the press release (PDF), it's safe to say that […]

Might well be true for the rest of Europe, but a cheaper price in Germany wouldn’t surprise me, given that Amazon.de has been selling the Paperwhite for 99 EUR (and as an Eater special until 9 April even gives you a 20 EUR voucher valid for everything sold by Amazon.de on top, reducing the price to effectively 79 EUR, unless you really don’t find anything you’d like to buy for the voucher [and I can tell, they sell some pretty cheap instant noodles that you can hardly argue against]). It’s hard competition here.

That would make sense, yes.

[…] we don't have to wait on the Kobo Glo HD. Late last night I had a fortunate accident with my review unit. I dropped it, and the back popped […]