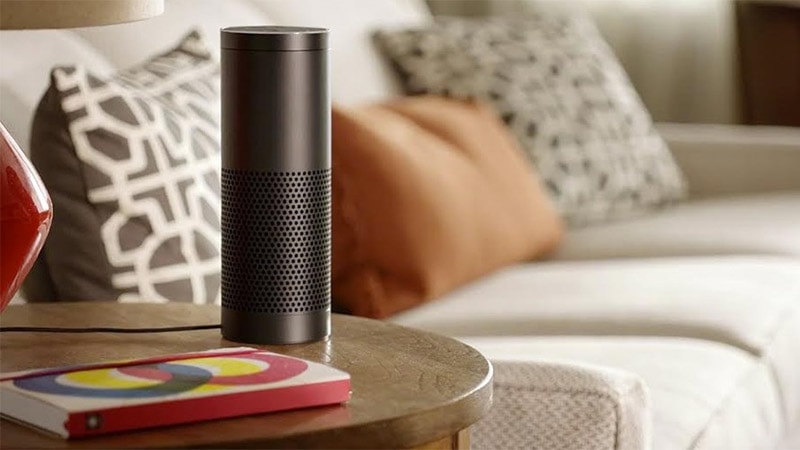 As I reported on Sunday, Amazon has added many new features to the Echo in the year plus since it launched, including smart home integration, Spotify, IFTTT, and support for playing Audible audiobooks and Kindle ebooks.

Amazon has added many features to its $179 in-home digital concierge, but for its next trick Amazon will be taking something away.

The WSJ reports that Amazon will be launching a new Echo model in the next few weeks which will be smaller, cheaper, and portable. Codenamed Fox, the device will likely only vaguely resemble its predecessor:

Meanwhile, Amazon is hoping it can repeat the cult success of the Echo device, potentially attracting the same customers who helped make its $50 bargain-priced Fire tablet a winner during the 2015 holiday season.

The new Fox device is designed to fit comfortably in the palm of a user’s hand, like a beer can, the people said. It calls to mind Apple’s popular Beats Pill portable speaker, though Amazon’s version rests vertically on a surface, these people said.

Unlike the Echo, which must always be plugged in to listen for voice commands, Fox can be charged on a docking station and responds to voice command only by pushing a button, a necessary compromise to preserve battery life.

Amazon has of course declined to comment on this rumor, but even without confirmation I think this rumor is almost certainly true. The leaked details make too much sense for them to be false, so that just leaves me one question:

Will it have a screen?

When I first heard this rumor, it immediately conjured up visions of the iPod Touch.  I know that everyone is comparing the Fox to portable speakers, but when I think of voice-activated, handheld devices, my mind turns to the Siri-equipped iPod Touch.

That strikes me as the ideal design for a portable device that responds to my voice. It’s small, light, and has a screen to display info or let me play games.

. The Echo has several, and the Fox will likely have at least one .

But I am also hoping the Fox will also have a sizable screen, and run Android. I think that would make it a more useful digital assistant, don’t you?

I hope NOT! Honestly we LOVE Alexa 🙂 Our Echo gets loads of use, and I laugh when we’re someplace else and I want to ask her something about music we’re playing or something else.

I hope that the Fox is small, ~$99 or less, and something I could have with me anywhere.

I should probably also point out that if it were going to have a screen, someone would have mentioned it to the WSJ (it’s not the kind of detail you could miss). So this is pretty unlikely wish-fulfillment on my part.

I would like a second mini Echo for somewhere else in the house provided it costs less than the $99 I paid for the first one.

lol and nobody will buy a phone that is not a phone, just like nobody buys ipods anymore.
this is not a speaker, not a music player or a voice assistant,it’s a trojan for the smart home – the same home that will tell you want and when to buy things. In some years it will grow legs (literally) but we are not supposed to notice, just yet.
The goal for now is to get more and more people used to it and grow the ecosystem. Making more than a speaker here would be a poor idea ,why mess with what works . In the future we should see more Amazon hardware and more 3rd party hardware using the service.

You’re right, a screen would be redundant. But I still like the idea of a display as a control interface for that smart home controller.

And you’re doubly right in that the new Echo is a smart home controller.

A screen shifts the focus from audio to visual and messes up the entire principle behind it. They want you to interact with it in a more casual way and from a distance- at least i assume so, not very well informed on this product.
This market is also less competitive, you got speakers that cost 20-30$ to make and retail for 150-200$. Sure there are some that are cheaper and there are some from China at great prices but overall it is easier for them to establish a decent market share and remain relevant.
One thing that could work would be a speaker with a projector since others are selling projectors at high prices and it doesn’t mess up the interaction, the screen being on only when needed and never as an input device. Ofc pico projectors are rather dim and bigger ones are pretty costly so finding the right path is not easy but maybe they consider such a product at some point.

PS: they do have an Alexa app so you use your mobile devices when needed.

I would like to have one in the form of a 'shelf unit' stereo system, that I could tell to sync to my music collection (I do CD ripping and/or audio capture at the desktop) once in a while, it would store the tunes locally, and then I could just use voice to tell it to play what I want. Maybe what I want is the Ford/Microsoft Sync in a home stereo?

That would be a good idea; it’s something that you can’t really do with the Echo because of its height (although you can tie in a speaker system, I think).

The iPod Touch has had a built-in speaker since the 2nd generation, which was released in September 2009.

Really? Is it internal?

I ask because I have played with it in stores and I didn’t think it had a speaker.