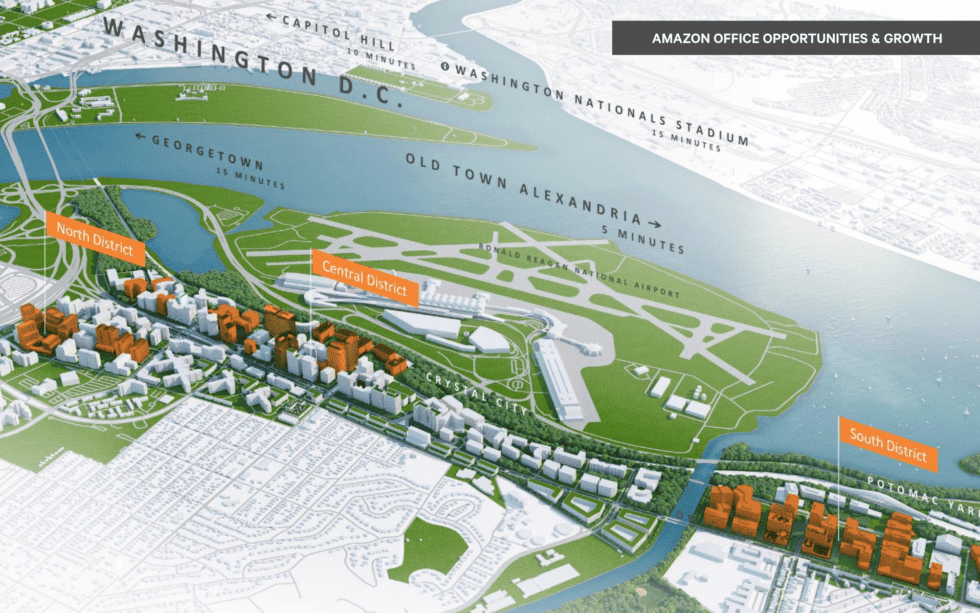 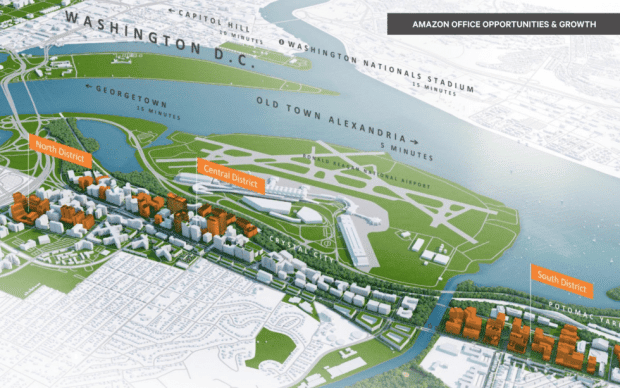 The hottest tech story of the past year, Amazon’s search to see which cities would mortgage their futures to secure Amazon’s next HQ, has come to its finale. Amazon announced Tuesday morning that the rumors circulating for the past couple weeks were true; the new HQ will be split between National Landing (aka Crystal City), and Long Island City (just across the water from NYC).

Amazon picked America’s financial and political capitals for its split new headquarters, saying on Tuesday it will build offices for more than 25,000 people each in New York City and close by Washington, D.C.

At the outset of the headquarters search last year, Amazon said it was looking for a business-friendly environment, in addition to help recruiting workers.

The company said on Tuesday it will receive performance-based direct incentives of $1.525 billion from the state of New York, primarily for creating 25,000 jobs. That works out at $48,000 per job.

It can also apply for other tax incentives, including New York City’s Relocation and Employment Assistance Program that offers annual tax breaks of $3,000 per job, potentially worth $900 million over 12 years for Amazon. What benefit the company would actually get was unclear.

In Virginia, Amazon will receive performance-based direct incentives of $573 million, based on 25,000 jobs at $22,000 in benefits per head. Virginia Tech said on Tuesday it plans to build a $1 billion graduate tech campus in Alexandria, just two miles from the new Amazon headquarters location.

Overall, Amazon will get a boost worth more than $2 billion for the new offices, on top of $1.6 billion in subsidies it has received from across the United States since 2000, according to a database from the Washington-based government watchdog Good Jobs First.

You can read more on Amazon’s blog, and read about the history of Crystal City in the Washington Post.

Reuters is understating the subsidies; back in March both Maryland and Virginia committed to providing $300 million in new funding for the local subway, annually. Known locally for its unofficial motto ("Sic transit Metro non"), Metro has been perennially underfunded for as long as I have lived here, so it’s good to see that might change.

But even so, we’re paying too high of a price for that small benefit.

Virginia is going to give Amazon tax incentives for jobs that were going to come to this area anyway. I can’t speak for Long Island City, but I can tell you that Northern Virginia is a tech hub, and we have a very healthy economy. In fact, we’re in the middle of a construction boom, with new skyscrapers going up every month.

There is no need to bribe companies to move here; they will do it on their own.

The only real accomplishment today is that my state gov’t has proven P T Barnum correct; a sucker really is born every minute.

I am, as a resident of Maryland, immensely pleased that this went to Virginia.

I am from Maryland also….good luck on 495! Can’t stand the drive over there already. What did Virginia gain??