If you have any paper books on your wish lists at Amazon.com or Overstock.com, now might be a good time to double check the prices. The 2 web retailers started a tussle over book sales last week and while this still appears to be a small scale conflict we could be looking at the beginnings of a price war.

Late last week Overstock.com sent out a press release which announced a sale. I didn’t write about it at the time (there’s no need to cover every sale), but in the press release Overstock promised to undercut Amazon.com’s prices on books: 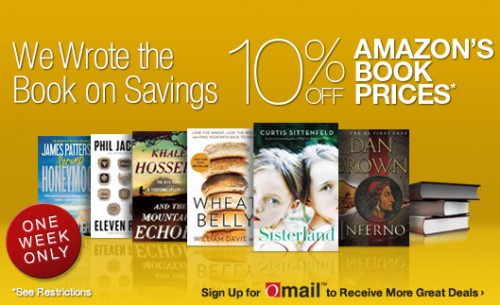 For a limited time, we’ve priced our books at least 10-percent below Amazon.com’s prices, as of July 22, 2013. This move immediately affects hundreds of thousands of titles.

The offer is only good for the books sold on both sites, which according to Internet Retailer is around 360,000 titles, but that’s still a decent sale price. It’s also a sale that other retailers like B&N have not decided to match.

I ignored the Overstock.com sale, but apparently Amazon did not. Late Friday night Amazon responded to with their own sale. Shelf Awareness reported on Saturday that:

Yesterday Amazon.com quietly began discounting many bestselling hardcover titles between 50% and 65%, levels we’ve never seen in the history of Amazon or in the bricks-and-mortar price wars of the past. The books are from a range of major publishers and include, for example, Inferno by Dan Brown, which has a list price of $29.95 but is available on Amazon for $11.65, a 61% discount; And the Mountains Echoed by Khaled Hosseini, listed for $28.95, offered at $12.04, a 58% discount; Lean In by Sheryl Sandberg, listed at $24.95, available for $9.09, a 64% discount; and The Fault in Our Stars by John Green, listed at $17.99, available for $6.55, 64% off. A notable exception is The Cuckoo’s Calling by J.K. Rowling, using the pseudonym Robert Galbraith, which is discounted 42%.

I have no details on the Amazon.com sale myself, but if the SA report is accurate then it would tend to debunk the commonly held belief that Amazon is willing to lose money with wild abandon. Instead Amazon has chosen a measured response that goes one small step further and hurts their opposition even more than Amazon.

The difference between Amazon’s sale and what many would assume Amazon was going to do could best be described as the difference between a game of chicken and MAD. Like most of Amazon’s other pricing decisions, this sale is based on the idea of going one step further than any of their competitors would dare.

The Overstock.com sale is reportedly only going to be lasting for a week, so there’s a very good chance that neither party will be crazy enough to drop prices any further.

And thanks to the settlement between the US govt and the 5 publishers who conspired with Apple, we’re probably never going to see a similar price war in ebooks.  Remember, the settlement agreement included a clause that Amazon could discount ebooks from one of the settling publishers up to the point that their marginal cost hit zero for the ebooks from that publisher.  That means that Amazon could at best offer an average of a 30% discount on ebooks published by the Big 6/5.

The Walmart-Target-Amazon pbook price war of 2009 only lasted a month or so.
In the end, all three ended up at the same price.

I do want to see if the anti-amazon-axis is going to divert any of their spleen toowards Overstock for "devalueing" their priceless cutural artifacts.

I doubt it. Only Amazon is evil, remember?

Thanks, I had seen the rhetoric that Amazon had declared open war on the book industry and figured that they were just responding to another company’s pricing. It’s amazing how they are demonized when they raise prices and when they lower prices.

I read that too, and snickered.

The really funny part is that the blog you link to has indeed demonized Amazon for both raising and lowering prices. Seriously.

And they keep selling their books through Amazon.
778 of them.

If only they had the courage of their convictions.

I think its more to get people to consider overstock for books. I would never of thought to look there for them (mind you, I have a stack of 90 books I need to read, so buying more isn’t a good idea).

That was news to me. I had no idea overstock even sold books. Now they have to beat Amazons steep discounts with another 10% off. Nice move Amazon..

I wonder how much the outcry over this sale is going to act as free publicity for both Overstock and Amazon?