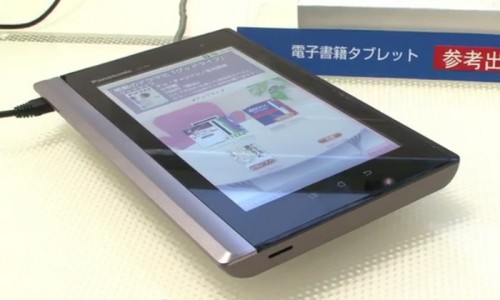 Panasonic had this baby on display this week at the Tokyo International Book Fair. It’s just a demo unit, not the finished product, and it’s based on a 7″ (1024×600) screen and it’s running Android v2.2 on an unnamed dual core CPU. It has Wifi, a camera and a microSD card slot. According to one report it also has a web browser.

If you check out the video, you’ll see that it shows a video player, web browser, and Youtube. That’s a pretty good sign that the tablet will be open, and that means you can install your own apps. The tablet will also ship with 600 titles. The final specs, release date, and price haven’t been announced yet. But Panasonic did say that this ebook reader is going to be released in Japan and it will use the Rakuten ebookstore, which will stock 10 thousand titles.

I’m joining the chorus on why The Daily will fail

That looks twice as thick as the NookColor. Same res screen, tho. And geez, they have a UI element Apple should have done: Those book stacks pinch-out to show their covers. Apple’s bookcase is garbage. They should use the Photos stack UI. Each stack a Category or Genre or whatever.

[…] announced today that the new Android based ebook reader they unveiled a couple weeks back would son hit the market. The is due to ship in Japan on 10 August with a retail price of around […]