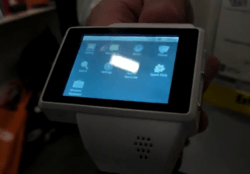 Do you recall that Android watch that Velocity Micro showed off at CES 2011? That one never made it to the market, but a similar device showed up at CES this year. Charbax found it in the Shenzhen Phaeton booth.

While it looks like a watch, this is really a 2″ smartphone that you strap to your wrist. It’s running Android v2.2 Froyo on a MTK6516 CPU (480MHz+280MHz) and it has Wifi, a microSD card slot, speaker/mike, and even a SIM card slot that works with the GPRS chip. There’s also a camera, and you can take pictures secret agent style.

The screen has a resolution of 320×240, and the touchscreen is capacitive. Standby battery life is expected to be about a week, with active use estimated to be round 36 hours. The price is just $200 for bulk orders, minimum order quantity of 500.

Readmill is Closing in 6 Days – Back up Your Account