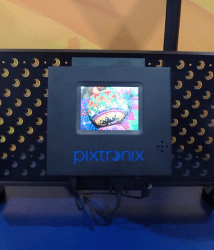 Today marked the first day of the show floor being open at SID Display Week,and I made time to go see the 2 screen tech companies on the top of my list: Qualcomm and Pixtronix. I’m holding the Qualcomm post until tomorrow so i can go retake the photos, but the Pixtronix photos are fine.

The info I weaseled out of them is rather thin, but what can I do.

Pixtronix had just the one 5.25″ screen on display at the show, and they declined to discuss the 10″ and larger screens that their (former?) partner Samsung showed off last year.

Qualcomm bought Pixtronix  in December 2011 for an undisclosed amount of money and without ever actually saying why. Since that day Pixtornix has been exceptionally quiet on their partners, manufacturing plans, and release dates for their screen tech. But I did pick up a few details.

I don’t know who their partners are now (I only know what Pixtronix said before the sale), but I was told that the partners control the production schedule; Pixtronix only works on developing the design. I was also told that since being bought by  Qualcomm Pixtronix has been told to focus their attention on just the consumer electronics market.

Given that Qualcomm is bound and determined to release Mirasol into this market, I’m seriously beginning to suspect they’re considering replacing one screen tech with the other  – and hope no one notices. Admittedly, the screen tech has little in common besides having a vaguely similar technology, but I cannot think of another reason to buy a second screen tech company.