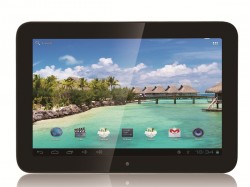 There’s a quite a few generic Android tablet makers out there, and Idolian is one of the better ones. They lent me their new 8″ Mini Studio tablet a couple weeks ago, and I must say that I like what I have seen.

This budget tablet is comparable in price to the Kindle Fire 2 and is a decent alternative to that older tablet. It has a good quality screen, decent battery life, and is more open than the KF2.

BTW, there are a number of older 8″ budget tablets that were released last year. The Mini Studio bests most of the 8″ tablets in its price range byhaving a better CPU and Google Play. 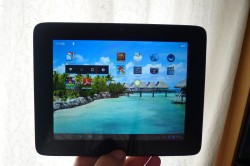 The Mini Studio is a new entrant into the budget tablet market, having just been released in early 2013. This 8″ tablet is running Android 4.1 Jelly Bean on a dual-core 1.6 GHz CPU with 1GB RAM, 16GB Flash storage, wifi, Bluetooth, and 2 cameras. The screen resolution is 1024×768, the same as on the iPad Mini, and the Mini Studio has a general appearance which is inspired by the iPad, including a black front, silver back, and a divot of black plastic on the back (which does not cover a 3g or 4g antenna, unfortunately).

On the back you will find a camera, speaker, and the volume buttons, and on the right side are all the ports (power, headphone, microUSB, HDMI, and a microSD card slot). There is also a microphone somewhere but it is not marked.

The general build quality of the Idolian Mini Studio is as good as on more expensive Android tablets. It weighs somewhat more than 7″ tablets (5% heavier than my KFHD), but not so much that you would notice.

This is also a very sturdy tablet. I inadvertently knocked it off a table on to a tile floor. It landed without damaging the screen or shell.

I can confirm that this tablet will play 1080p video, but I had no way to check the HDMI port. Video playback worked well, and I didn’t see any skips, artifacts on the screen, and the sound never got out of sync with the video.

Audio was about what i expected on a budget tablet. Like many budget tablets, the Mini Studio has just the one speaker on the back. It’s adequate for quiet rooms, but really loud enough for noisy situations. 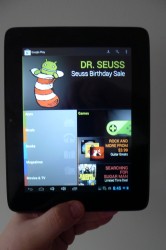 The Mini Studio ships with the usual basic suite of apps, including email, the standard web browser, a file manager, camera, sound recorder, an Adobe Flash player, but it lacked Google Play or any other app store.

Luckily that was easy to fix. Installing Google Play only took one app. You can find instructions here.

As for running apps, I’ve been using the tablet as an ereader (Aldiko), feed reader (Google Reader), and I’ve been playing games on it all week. The several games all installed and played just fine.

Though I will note that I have noticed the occasional hiccoughs. One of the 3rd-part games I downloaded occasionally exited unexpectedly, and the Aldiko app (from Google Play) froze (but did not crash). I’m not sure if the problem is caused by the apps or the tablet, but the severity of the issue was relatively mild.

This tablet has an 8″ screen with a resolution of 1024×768. The quality of the screen is higher than I expected and in fact it is going to make me raise my standards for budget tablets.

I’m not one to notice the nuances of a screen, though I can spot obvious problems like blemishes, dim spots due to a poor backlight, and the like. Obviously the Mini Studio did not show any such signs. My one real test for screen quality is the viewing angle.

The viewing angle on this tablet is much wider than I expected. It’s over 160 degrees wide, and that means you can almost hold the tablet on edge and still see what is on the screen. That is not something you can say about most of last year’s budget tablets.

The battery on the Mini Studio is specced at 4.5Ah. I could not find an estimate of the run time, but I can say that in my experience it offered about 4 days of practical battery life. I was us

ing the tablet at my desk and in bed as both an ereader and to play games.

The Mini Studio is equipped with a couple cameras: a 2MP camera on the back and a VGA resolution camera on the front. There’s no flash or zoom for either camera.

I have attached a photo taken with each cam

era. As you can see, the rear camera offers a decent image quality, but I cannot say the same about the front camera. This photo was the best I could do after a half dozen tries. 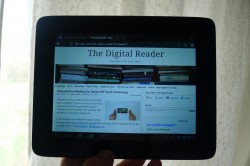 So what do I think of this tablet?

That depends on what it is compared to. Idolian lines it up against the iPad Mini, a tablet that costs twice as much and and is more polished, as well as aimed at a more profitable market niche.

The Mini Studio is a budget tablet, and I think the closest brand-name tablet with comparable specs performance would be the second-gen Kindle Fire (or KF2) that Amazon released last Fall. Both tablets cost $160, have a dual-core CPU, and are targeted at the high end of the budget tablet market.

I think the Mini Studio is a good alternative to the KF2. It’s the same price, but offers a decent camera, more storage and connectivity options, and a better app store.

But it also loses the Amazon content like Amazon Instant Video and – well, no. That’s about the only Amazon app you can’t install via Google Play or the Amazon Appstore.  So if you’re not wedded to Amazon’s video service, this tablet is serious alternative.

The Disruption of the College Bookstore Market Enters Phase Three

I prefer the dimensions and weight of the IPAD mini. Of course the display is slightly smaller on the mini I think at 7.9 inches.

Thanks for the review. The few reviews I’ve been able to find on this Idolian 8′ Mini Studio seems to pretty much support that its a good tablet overall. I’m surprised the cameras have no zoom. My cheap hipstreet Titan tablet I think can zoom and its on android 4.0. How come theres no zoom on this tablet? Can the cameras make videos? Is it true the micro sd can go up to 32g? That at least makes it capable of having storage space of up to a 32g Ipad mini doesn’t it? Or does it mean only technically another 16g available? How does that work? I’m not as tech know it all.

Well, the MinI Studio can zoom but it’s a faux zoom. What it is doing is cropping the image and throwing away the extra pixels. That kills the resolution, so it’s not a real zoom.

And I don’t have a 32GB microSD card to test.

I haven’t tested one of these, but every tablet I’ve used can support a 32Gb card. Android’s file system mounts each volume separately, so internal memory has no effect on card space.

I got one. The icons were missing. Those instructions will get a Chrome icon in home, but it still doesn’t show in "Apps."

It’s ridiculous that there’s problems with the basic pre-installed stuff. Did they even spend 10 seconds testing the software configuration before releasing?

Am I the only one who got one with a pic of a ceiling light; a pic of a laptop, elbow, and a stack of new tablets, and a noisy audio file of some woman saying "Yes-i, yes-i, yes-i… yes-i, yes-i.." in the media files?

I didn’t have those photos in the media file, nor the audio clip. Are you sure you don’t have a used tablet? FYI: mine was shrinkwrapped.

Yeah. I got it new on Amazon, cellophane around the box, those clear round stickers holding the top and bottom together looked undisturbed, the tablet in it’s own bag, everything looked fresh and new. When I went to the camera app for the first time, right away I saw some stranger’s ceiling light in the corner.

Actually, I should say it was Fulfilledt By Amazon, Digitz was the seller, they’re the featured seller for new.

I have had a studio mini since January and I have not had any problems. Of course with all alternative tablets this one has it’s unique features that differ from the higher end tablets. Like the chrome is tricky to download.

Oops I pushed then wrong button. But all in all if I wanted to spend twice as much on an tablet that will do basically the same thing and had the money' I might have gone that rout. There is definitely a market for this tablet. I have a friend who uses a I pad mini and we compared the two. WhilemInam not one bit ashamed of the studio I would be crazy to say the ipad is an inferior. The studio is definitely nota iPad but the iPad is no studio, if that makes sense. For one it is quite a bit less expensive. The. Bottom line is, the studio mini at least mine that is, does everything advertised and with a passion, it looks good, and has a middle class price tag. I have owned several tablets and this one has everything I was looking for.

I’ve had my mini studio for 6 weeks now and I love it. It actually does come with the Google Play Store app but for some strange reason, it is hidden. Go to Settings/Developer options. At the very bottom of the page (under Apps,) uncheck 'Hide Google Application.'