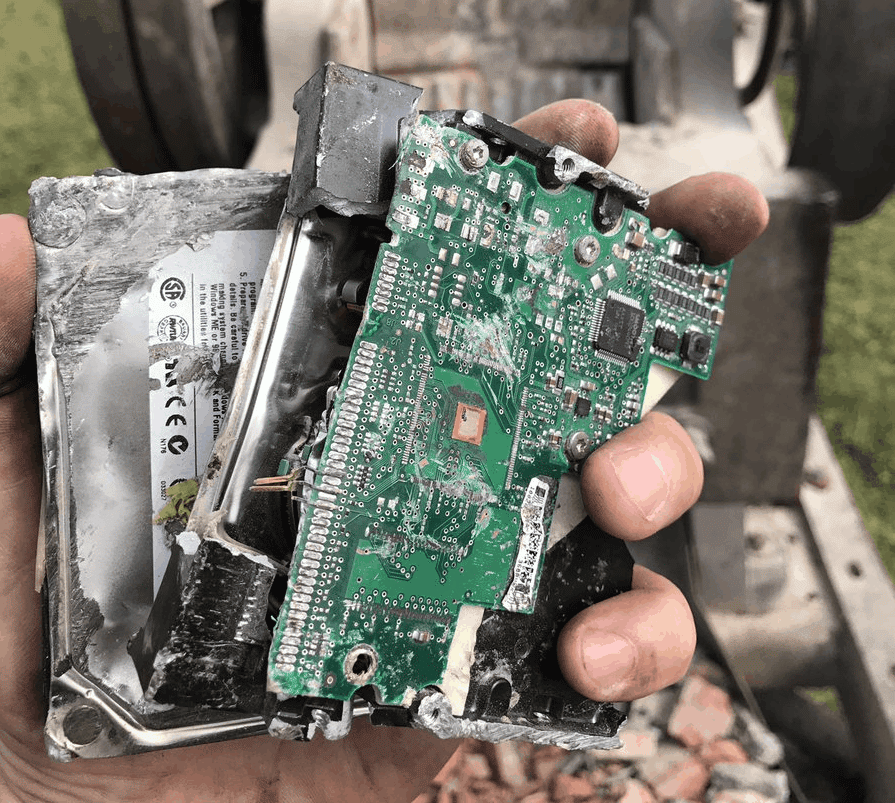 In an age where authors and artists like VC Andrews and Tupac go on producing for their corporate masters long after they have died, Terry Pratchett has pulled off the impossible.

The Guardian reports that his unpublished books have been destroyed:

The unfinished books of Sir Terry Pratchett have been destroyed by a steamroller, following the late fantasy novelist’s wishes.

Pratchett’s hard drive was crushed by a vintage John Fowler & Co steamroller named Lord Jericho at the Great Dorset Steam Fair, ahead of the opening of a new exhibition about the author’s life and work.

Pratchett, famous for his colourful and satirical Discworld series, died in March 2015 after a long battle with Alzheimer’s disease.

After his death, fellow fantasy author Neil Gaiman, Pratchett’s close friend and collaborator , told the Times that Pratchett had wanted “whatever he was working on at the time of his death to be taken out along with his computers, to be put in the middle of a road and for a steamroller to steamroll over them all”.

On Friday the manager of Pratchett’s estate carried out his wishes, using an antique steam roller to destroy a hard disk that reportedly contained the only copies of Pratchett’s final books. 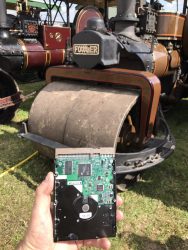 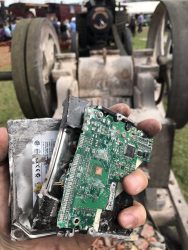 Considering that even Isaac Asimov and Robert Ludlum have been zombified and continue to produce new works, Pratchett has pulled off the nigh impossible.

And no, I am not exaggerating. According to EW, there’s a long list of authors whose works have been exhumed or whose names have been turned into brands:

V.C. Andrews, who died in 1986, still cranks out about two books a year (most are by Andrew Neiderman). Eric Van Lustbader has churned out five Jason Bourne thrillers under the name Robert Ludlum™ since the original author’s 2001 death.

This fall, we’ve seen estate-authorized sequels of everything from A.A. Milne’s Winnie the Pooh (David Benedictus’ Return to the Hundred Acre Wood) to Douglas Adams’ Hitchhiker’s Guide to the Galaxy (Artemis Fowl author Eoin Colfer’s And Another Thing…) to Robert Jordan’s Wheel of Time series (Brandon Sanderson’s The Gathering Storm). At least Colfer and Sebastian Faulks, who published the James Bond sequel Devil May Care last year, are writers of some repute. But some of these brand extensions seem not much better than authorized fan fiction. (Anyone remember Alexandra Ripley’s Scarlett?)

I’m not even counting the exhumation of every unfinished (or nearly finished) manuscript or previously unpublished PostIt note by a noted author. This fall brings Michael Cricthon’s Pirate Latitudes, an adventure story set in 17th-century Jamaica apparently completed before his death, as well as Kurt Vonnegut’s story collection Look at the Birdie, William Styron’s The Suicide Run, and Vladimir Nabokov’s unfinished final novel The Original of Laura.

Of course, just because Pratchett isn’t joining The Undead Authors Guild today is no guarantee that he won’t join said embalmed ranks in the future.

Throw enough money at his heirs twenty years down the line and they might change their minds. 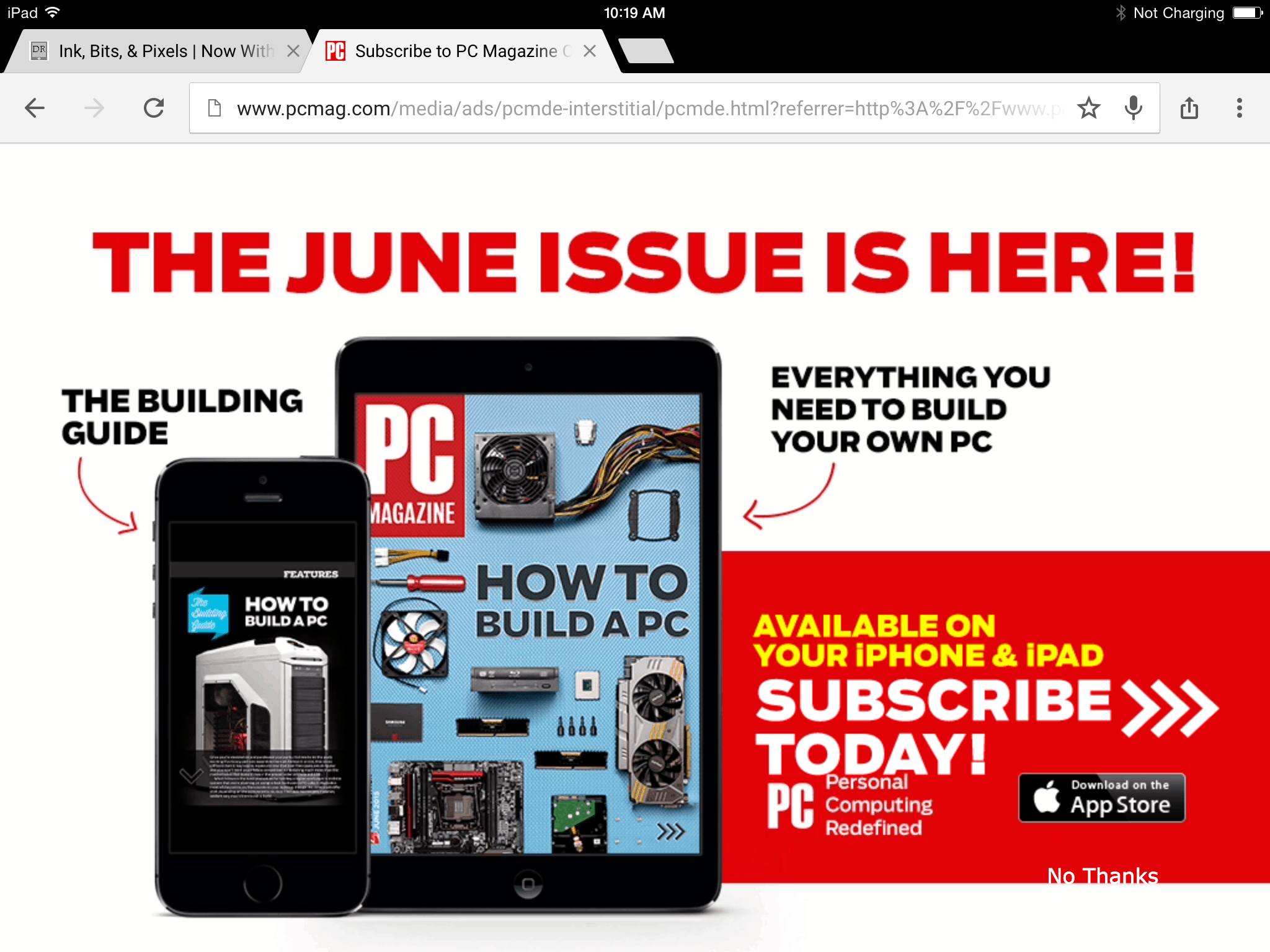 Google: 69% of Website Visitors Will Leave a Site When Prompted to Install a Mobile App

Your last sentence is key. We can curse soulless corporatism all we want but it’s ultimately the heirs who are giving the green light to these "zombifications."

I don’t think lumping Brandon Sanderson in with these other cases is quite accurate. Sanderson was already a successful author, and Robert Jordan knew he was dying and wanted the series to be finished. He purposefully left notes and recordings expressing his plans and wishes for how the series would end. Sanderson was chosen by Jordan’s wife and editor to finish the Wheel of Time series, not to continue publishing "Robert Jordan" stories indefinitely. Also, Sanderson did an amazing job on the final three books, rescuing the series from some major missteps by Jordan in the last few books in the series that he wrote.

I’ll remove the reference, then.

I bet the lawyer made a copy of that drive before it was destroyed.

I was thinking the same thing.

It seems implausible that there wold be no backup. Perhaps he was old school and these were on CD-ROM or backup disks and these got steamrollered as well. But prudence would dictate having one 'off site' or in cloud as well. So it will depend on how thoroughly his wishes were specified and carried out.

After a decent interval, another copy will be "discovered", perhaps.

I’ve yet to read a single post-mortem work which did anything but bring shame to the dead.

Turns out, there’s a reason that famous authors are famous and it has nothing to do with them being a big name. Speaking of which, has anyone seen James Patterson lately? The quality of the books under his (sole) name lately suggests that he, too, might be 6 feet under.

I thought Pride and Prejudice and Zombies was pretty good.

Also Lustbader’s novels are published under his own name. You find both Ludlum and Lustbader’s names appearing on the covers. Establishing that Ludlum created the series but the novel is written by Lustbader.

You see the same with the continuations of Vince Flynn’s and Tom Clancy’s series. EW makes it out as if these are all ghost writers which is not true.

Much of these continuations are just terrible IMO (actually all listed). Here are a couple of other really bad ones:

A sequel to Gone with the Wind (yeah that actually happened).

Go Set a Watchman. Talk about bait and switch. Selling an early draft as some kind of authorized sequel is terrible fraud.

Overall I don’t think that we should treat an author’s work as a franchise to be exploited. Writing is more personal than cinema and tv and should be treated as such.

[…] Pratchett may have avoided ghouls robbing his literary estate after his death, but other authors were nearly as lucky. Some authors (for example, Harper Lee) […]