Ookbee, a 2-year-old startup, has recently announced that they just hit a major milestone. As of October 2012, this southeast Asian ebookseller was counting over 2,500,000 registered users.

CEO and founder Natavudh Pungcharoenpong spoke to Tech in Asia in Tokyo last Friday where Ookbee won top prize for the startup pitch section. According to Natavudh, "Our first million took 13 months, the second million took six months. We will hit three million in about three to fours months."

This startup is as well-known in Thailand as it is unknown outside of the region. They reportedly control over 85% of the ebook market in Thailand, and sell ebooks via Android and iOS apps. Ookbee also offers local publishers a suite of authoring tools to convert their content into interactive digital magazines which can then be sold via Ookbee.

Ookbee recently secured $2 million in funding from InTouch, a Thailand based venture capitalist firm InTOuch acquired a 25% stake in Ookbee, putting it’s current market value at around $8,000,000. I would say that puts it in an excellent position to be snapped up by Rakuten, but Ookbee’s management aren’t talking about that. Instead they’ve discussed plans to expand into neighboring Vietnam as well Malaysia. 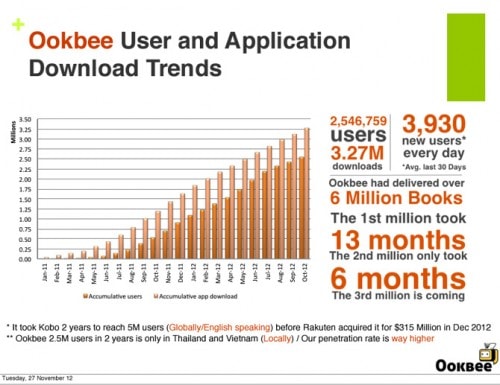 […] and Singapore, Oookbee boasts 5.5 million users, more than double the number of users reported in December 2012. Membership is expected to top 10 million by the end of […]