There are rumors that Amazon plans to launch the Kindle in Japan, Brazil, Poland, and elsewhere, and today you can move China to the top of the pile. Keen eyed bloggers at the Chinese tech blog Technode have stumbled across something Amazon doesn’t want you to see. They haven’t found Chinese language product listings for the Kindle, but they found something almost as good.

They found, on Amazon’s Chinese website Amazon.cn, the templates for Kindle help pages. The pages are down now, but if you like you can look at the ones that are in the Google Cache. 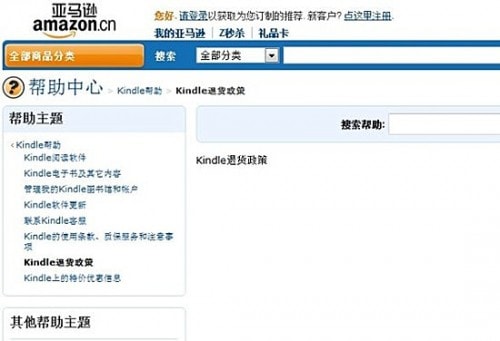 The pages are empty of content, but they are on an official site and they do look legit (especially after you feed them through Google Translate). So this clearly suggests that Amazon is going to launch the Kindle in China. Well, I’ve heard before that they were planning to launch the Kindle there, so this doesn’t come as a complete surprise.

But there also haven’t been any rumors about a Kindle launch in China nor have there been any hints that Amazon is signing Chinese publishers nor have they admitted to stockpiling Chinese language ebooks. So while the long term plan was known, the immediacy of the help pages shows that events might be moving faster than anyone expected.

But when Amazon moves in they are going to find an ereader market that would best be described as tepid. Even though the population is well over a billion and a half, China’s ereader market is tiny. Current best estimates put it at somewhere under 2 million ereaders sold in China in 2011. In comparison, B&N alone probably sold that many Nooks in 2010 – just in the US.

The latest official figures puts the ereader market split in China at Hanvon (60%), Shanda (20%), with the remaining 20% being taken up by the small fry. Of course, the "official figures" don’t include gray-market ereaders. There’s an ongoing effort to import Kindles and sell them in China. I don’t know how many have been sold but I have heard that 3G coverage does work in some Chinese cities.

3G totally works in China! It’s part of the reason why it’s banned — Facebook/Twitter are all within easy access!