The German gadget maker is going to be delivering an early Christmas gift this year: their first frontlight-equipped ereader.

The Pyrus 2 LED might have a funny name, but it also has a 6″ E-ink screen (600×800), 2GB of storage, and a microSD card slot. Unfortunately this ereader is lacking a touchscreen or Wifi, but that’s what happens when you drive the price down to 80 euros.

This ereader is licensed from the same OEM as Trekstor’s other ereaders, but as you may have noticed, the Pyrus 2 LED doesn’t have the "Digital Ink" knockoff E-ink screen found on its 4.3″, 8″, and 6″ siblings. Instead this ereader has a real E-ink screen. 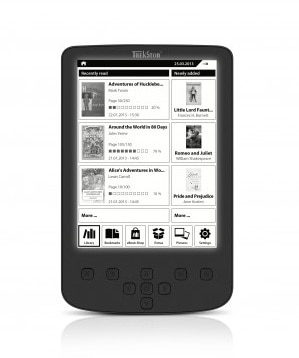 The shift from one screen supplier to another is likely due to the frontlight. E-ink is capable of attaching a frontlight to their screen and selling the assembly to ereader makers, but they’re not all that interested in simply selling the frontlight component. And apparently the OEM who designed and built the Pyrus 2 for Trekstor can’t yet make their own frontlight.

There’s no information yet on battery life or weight, but I do know that the Pyrus 2 LED will officially debut in October at IFA-Berlin.

This is going to be a rather curious product at its price point. It’s going to cost 80 euros, or about 10 euros more than the Trekstor’s other 6″ ereader. It’s not the cheapest ereader on the German market, but it is the cheapest one with a frontlight. I think I can see the appeal.

Is the Canadian eBook Market Leveling Off?

If there’s no wifi does it at last have a lan port? 😛

It has a USB port, yes. That can be assumed.

The Tolino should be a better deal, featuring a better screen, WLAN, hackability (by using an internal SD card, as the Kobo readers do) and by now probably better software. Since there are also rumors about a Tolino 2, the price might also drop. Even now, it can be had on eBay for cheaper than the 99 EUR official price. They should have sticked with that "Digital Ink" screen, if that had made the device even cheaper. The Pyrus mini’s 4.3 inch display is really sexy. That thing with frontlight, touch, WLAN, Bluetooth. hackability, GSM and GPRS all together for, say, 59 EUR would be the best thing since sliced bread. Why does nobody build such a device? Given that the Pyrus mini could be had for around 30 EUR, it should be possible to add all the missing things to it.

If you want the extra features then the Shine is defintely a better deal. But if you just want a frontlight on your ereader then the Pyrus 2 might be appealing.