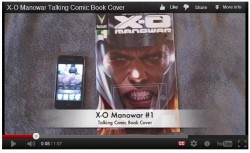 Do you recall how I like to describe augmented reality in books and ebooks as a gimmick? I found an example today that deserves the ridicule. On Friday BoingBoing posted a video of a new cover from a new comic book series. This series actually launched a couple months back, but the trick cover is so cheesy that no one cared to write about it.

As you can see in the following video,  Manowar #1 comes with a QR code and a a dotted outline that is about the size and shape of an iPhone. You’re supposed to scan the QR code and be directed to a website where a video clip will be played full screen on the iPhone.

I think it’s cheesy, but apparently I am the only one who does.

There was a link in the BoingBoing comments section that led to a collection of similar "iPhone over mouth" augmented reality tricks. This has been used a lot, and some weren’t bad. For example, one guy used it in his resume; he couldn’t get his foot in the door but he could still get the recruiters to listen. Now that was clever.

And a couple of the other examples look like they’re ads. I’m not sure what they’re saying, but do you know what? It’s still cheesy.  If you want to do a video, link to it. Don’t try some Clutch Cargo kind of gimmickry.

You are not the only one who thinks that is cheezy.