When I first reported on the new Kindle Voyage earlier this week I mentioned that the Voyage was running the same software as the Paperwhite. It turns out that is not entirely correct. While the two Kindles use what looks like the same web browser, the software running underneath the UI is not even close to being the same.

At the request of a reader, I spent some time yesterday playing with both Kindles, testing the web browsers, and I can report that the Voyage has the much better web browser. It’s enough better that I sincerely hope that the Paperwhite gets it in an update otherwise this could be a strong selling point for the Voyage.

While the web browsers look the same, offer the same features (like article mode), and are about equally fast at loading a page, there are ways that they differ.

For example, the Voyage loads the settings menu faster, but the Paperwhite responds faster when you scroll the page. I played with both web browsers, and I visited websites like Google, Boing Boing, Techcrunch, and this blog. I noticed that simple things like website menus opened faster on the Paperwhite.

Update: At the request of another reader, I tried Dropbox and the Manage Your Kindle page on Amazon.com. Those crashed on the Paperwhite, and they also crashed the Voyage’s web browser.

All in all, the Voyage has the better web browser, but rather than laud it I am going to sit back and hope that the Paperwhite gets the improved web browser in an update. I for one would rather browse the web on the Paperwhite’s lower resolution screen.

This might sound counter-intuitive, but the higher resolution screen on the Voyage might not actually be a good thing when it comes to web browsing. Because the resolution was so high (1080 pixels wide), websites with responsive layouts served up the full desktop webpage to the Voyage. The Paperwhite with a screen width of 758 pixels, on the other hand, was served a mobile version of the same website.

The latter was IMO much easier to use on a 6″ screen.

As you can see in the screenshots below, the Voyage packs more content into a single screen image. This gives you smaller text and more ads.

To be fair, I’m sure you would appreciate the higher resolution of the Voyage’s screen more when reading in article mode, but getting there is another matter. Much to my surprise, we’ve found an example of where more is not necessarily better.

But that’s just my opinion, and as I read it again I think it might be a minority opinion. What do you think? 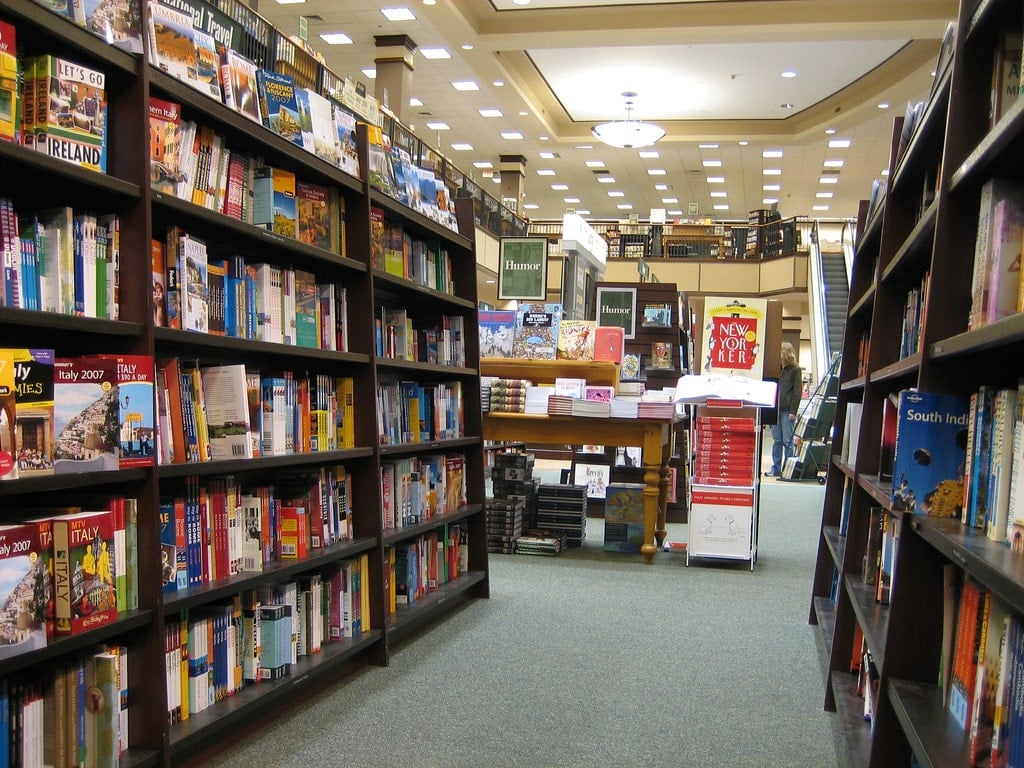 Of late, I would say that 90% of the time I’m using the Paperwhite browser, it is to view a Wikipedia article. The most annoying part of that is scrolling down to read it, using swipe up gestures. The scrolls tend to be wildly inconsistent, so it is not like hitting space bar or page down with a desktop browser, where it scrolls the last line up to the top of the screen so you can continue reading: it scrolls a few lines, or maybe only halfway.

So my biggest question about the Voyage browser is whether the page turn buttons are hooked up so that 'next page' scrolls a full screen (just as it does on button-endowed Kindles).

The other questions I have are whether Voyager can navigate pages that Paperwhite cannot. For example the Amazon 'Manage Your Content' page reliably crashes the Paperwhite browser, as does dropbox.com. Those used to be popular destinations for me until they did some redesign that requires something Paperwhite doesn’t have. Another use case was going to a library’s overdrive.com site. I think that still works. Then 'just for fun', I like to load up Google Play Books web reader. That should work a little better on the Voyage, as that web interface wastes so much space for the UI 'chrome'. And maybe even the page turn buttons will do something useful?

But it is ironic that higher resolution can degrade performance when serving up web pages. Makes total sense that it would. In some cases explicitly loading the mobile version may help, where possible.

"So my biggest question about the Voyage browser is whether the page turn buttons are hooked up so that ‘next page’ scrolls a full screen (just as it does on button-endowed Kindles)."

That would be a really good idea, but they didn’t think of it.

Dropbox crashed, and so did that Amazon page. But Google Books web reader worked – slowly.

My question is: how did you take a screenshot on the Voyage! I can’t figure it out.

The trick is to press the opposite corners of the screen.

I’ve known about that trick, but it doesn’t seem to work on the Voyage for me…

Ahh, it does work. It is just a little more finicky on the Voyage. Thanks!

If you don’t lift your finger while swiping up or down, scrolling is much more precise and controlled. Another one of those unconscious habits the brain tries to bring over from standard touch screens.