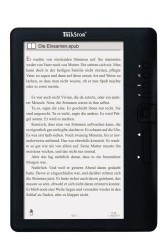 The German publisher and media retailer Weltbild reported earlier this week that their new ebook reader, the Trekstor eBook Reader 3.0, is positively flying off the shelves. In the few short months since it launched, it has sold, according to Weltbild Managing Director Klaus Driever, in the high six-digits.

Sales of this ereader exceeded Weltbild’s projections by a factor of 3 or more. They also reported that this ebook reader has sparked an exponential growth in ebook sales, with 2011 expected to show a several hundred percent increase over that of 2010.

The ereader was launched at the Frankfurt Book Fair in October of this year with a low retail of €60. It’s quite the basic ereader, and it lacks Wifi, a touchscreen, or many of the features found on more expensive models. But its success shows that price often wins over features (it has few). Weltbild supports it with an ebookstore stocked with over 130 thousand titles, including new releases that are reportedly 15-10% cheaper than the paper editions.

I have reviewed a similar model, which was imported into the US by Southern Telecom. To be honest, I didn’t think much of the Slick ER-701, but I appear to be in the minority.  A number of owners have commented that they like the device and appreciate the value.

BTW, I was a little surprised to see this ereader launch in the US. The big boys (Amazon and B&N) are fighting a price war, and they are dragging the market lower and lower. I’m not sure we’re going to see more budget models here in the US next year.