Microsoft confirmed yesterday that the next version of Windows 10 will include an ebookstore and reading app built into the Edge web browser.

References to the reading app and store had been found in previous beta releases of Windows 10, and yesterday MS told us:

With the Creators Update, we’ve added new features like advanced tab management to help you find, organize and open tabs you’ve set aside without leaving the page you’re on. You can now discover and get your favorite e-books in Windows Store and read them in Microsoft Edge across all of your Windows 10 devices.

The Creator Update will be released on 11 April, but that is really all we know for certain at this time.

Beta versions of the Edge browser have supported Epub since November, though the user reports I have heard suggest that the app is buggy and still only semi-functional.

The store, on the other hand, was spotted in the code in a January beta release of Windows 110 mobile. It didn’t work at that time, but we did get a screenshot of the storefront: 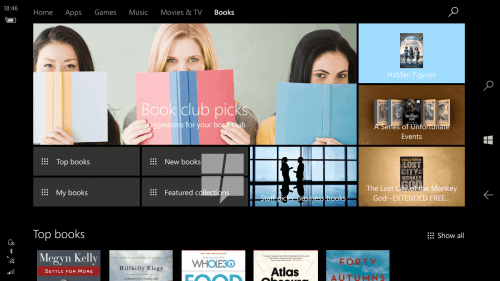 Whether the store uses this layout remains to be seen.

Kindle Touch Gets World’s Simplest JailBreak (And It Runs HTML5)

Windows 10 is truly nothing but an advertising system masquerading as an operating system. They have learned well the lessons taught by Apple!d Win 7 will be my last.

I could not in good conscience recommend windows 10 to any business. The two biggest problems with windows 10 are you can not delete the Cortana and edge has the malware thoroughfare called Flash built-in. They do not let you get rid of that unwanted or needed one drive.

If and I say if cortana did all its processing local then it might be something useful but as is I want it gone completely.

Really? 2017 and they’re adding epub books to their app store so that you can read them in your browser? OR, your Windows phone?

[…] arena, complete with their own in-browser ereader. It seems that this is, indeed, going to happen when the launch goes live on April 11. Watch this space. Meanwhile Yahoo Japan has gone the other way, outsourcing the operation of its […]