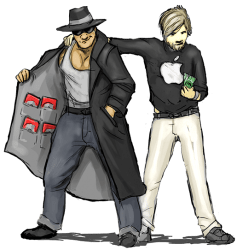 I just came across a blog post by Wolfire Games, an app developer. They recently uploaded their first game to the Mac Store, and much to their surprise a pirated copy was already in the store.

Um, no. The code for the games were released under GPL, but not the actual games. The games have a lot of content that isn’t covered by the GPL (graphics, sound, etc).

Wolfire report that they’ve already complained to Apple, and Apple ignored them. I’m not surprised. Why should Apple care about the little people? They’re Apple.

Leaving aside the Apple bashing, this is not the first time we’ve heard of Apple selling pirated content. I’m surprised that Apple have continued to fail to fix the problem. They clearly have a flaw in their procedures, and ignoring the problem is a worrisome pattern of behavior.

Okay, it’s only fair that I point out this is only a few days old. You could argue that Apple haven’t had time to respond. I disagree. The pirated app should have been suspended within 24 hours, and then left down while Apple investigated.

God Bless the Coloring Books – AAP Reports Trade Revenues Up in 2015, eBooks Down

Ugh, this makes my stomach hurt. It illustrates my biggest fear with CC licensing as well — that the lazy/greedy/stupid contingent will deliberately misread one’s licensing terms and claim you’ve given them carte blanche to take control of the content and do anything they want to it.

My list of New Subjects That Should Be Taught in High School keeps growing: personal finance, intro to the legal system, and now how IP works.