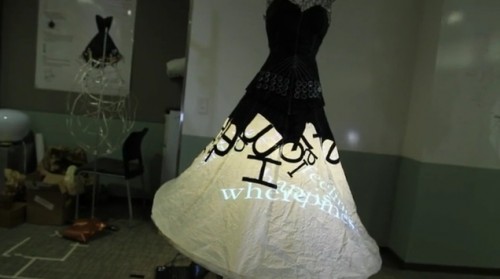 Here’s an interesting project from the research division at Microsoft. It’s a concept design for a dress that demonstrates the transparency of social media. It’s called the “The Printing Dress,” and it was created by Microsoft’s Asta Roseway and  Sheridan Martin Small.

This dress won Best Concept and Best in Show at the 15th annual International Symposium on Wearable Computers (ISWC) in San Francisco back in June. It’s not epaper or any novel screen tech, unfortunately. No, on that dress the words are being shown with a fairly ordinary (but probably compact) projector. There’s also 4 circuit boards and a keyboard (built into the bodice).

It’s not meant to be worn, obviously, but if it were then you might type your Tweets on the bodice keyboard and they’d show up live on  the dress. “You are probably familiar with that old saying, ‘You are what you eat,’ but how about ‘You are what you Tweet?’” Roseway says about the dress. “The dress looks toward a future with a new realm of social accountability, where you literally wear what you Tweet. Our words aren’t out there; they’re on us.”

This marks an interesting reversal of the usual anonymity of the web. I mean, of all the Twitterati you know, how many have you actually met?