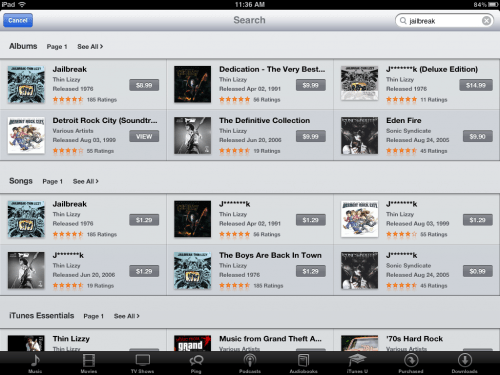 You may have caught the news today about Apple’s new censorship plan, and I’m here to tell you that it’s true.

Apple has never been happy about the fact that many iDevice owners like to hack their device, but today they’ve taken that to a whole new level. They’ve started blocking the word jailbreak in their entire content store, including iTunes, the app store, and iBooks.

This word is being treated like a censor might treat curse words. Most (but not all) instances of the word jailbreak are being replaced with j*******k. This is particularly amusing in iBooks, where it is applied to a work of poetry.

There’s no word from Apple on why this happened, and to be honest I don’t expect them to say anything. This action is so nonsensical that I seriously doubt that it was intentional. This feels much more like an example of geek humor. Some programmer thought it would be funny to create the script which enables the censorship, though he probably never planned to upload it. No, that was likely an accident. But it is funny, nonetheless.

Update: It turns out that this had been going on for at least a month before anyone noticed. And this was indeed an accident; TNW is reporting that the word was added to iTunes content filter system. It seems to be a simple error tied to the ratings systems applied unilaterally in iTunes. It appears as if the word jailbreak got added to a general ratings list, rather than a specific block on apps – where Apple might want to protect users from scammy fake jailbreak apps.