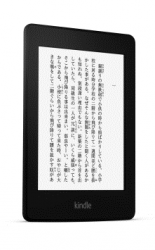 Here’s news which comes as no surprise to anyone who read the user manual or the product page for the KPW.

Amazon has just announced that they are opening the Japanese Kindle Store tomorrow. They’re promising to stock a total of over 50,000 Japanese-language Kindle books and 15 thousand maga titles, including over 10 thousand free Japanese-language titles and a broad selection of works from a wide range of leading Japanese authors and publishers. Amazon is also boasting that that the Kindle Store will stock titles from  the various top 100 books, top 50 bunko, and top 100 manga lists in addition to the million plus titles found elsewhere in the Kindle Store.

But as a result of the darned supply issues, Amazon won’t be shipping the Kindle Paperwhite until 18 November. Retail is going to be 8500 yen, and the 3G model will sell for 13 thousand yen. I think Japanese buyers might have better luck getting it from Amazon.com rather than waiting. I expect the supply issues to clear up in the US before long.

BTW, if you’re looking for a Kindle app which will display Japanese characters, check out the Kindle for Mac app. It was updated in September and support for Japanese was one of the prominent features. 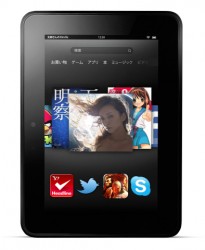 And in other news today Amazon has also announced the imminent Japanese arrival of their Android tablets. The second-gen Kindle Fire and KFHD are up for pre-order on Amazon.co.jp and will ship on 19 December. Retail will be 13 thousand and 15 thousand yen, and yes Japanese buyers will get access to the Amazon Appstore

Getting back to the ebooks: 50,000 ebooks, can you believe it? When Kobo launched in Japan they only barely managed to stock 18 thousand local titles, most of which were free titles. And as we all know, the rest of Kobo’s launch in that country went about as badly as could be.

Amazon is also facing some competition in Japan from Google. The Google eBookstore launched in Japan earlier this month, along with the nexus 7 Android tablet.

The New iPhone 5 Didn’t Live Up to the Hype

So, is it going to be possible to browse the Japanese Kindle Store with a Japanese account and even download ebooks? That’d be damn fine because so far I couldn’t find any Japanese ebooks.

Speaking as a Kindle author of science fiction, I think the opening of the Japanese Kindle site could be the most important development since the advent of the Kindle itself. Germany is currently the leader in reading Kindle science fiction books in English – I expect Japan to supplant that.

I’ve just completed a web application to browse the limited time free Kindle books on the Amazon Japan site: http://www.heidoc.net/amazon/kindle.php – it’s not much yet for Japanese books, but a lot of English language books are already available free.

Does the Japanese Kindle have a setting to be turned into english? I’m in Japan and can get a kindle shipped here from Amazon, but I would like one.

[…] I have no info at this time on estimates for the overall Japanese book market, but we can see that the Japanese ebook market has seen steady growth over the past few years which. It's nothing like the mad growth of the US ebook market during the early Kindle era, but there is clear evidence that the growth rate increased alter the Kindle Store launched in Japan in late 2012. […]