ongoing debate over just how much protecting  kids need these days. Not everyone agrees on the degree needed, but parents want to more carefully control what their child does with gadgets might want to consider the ClickN Kids tablet.

This is a fairly basic Android tablet that offers a full Android experience (including Google Play) as well as a more locked down and protected mode for kids. The kid’s mode restricts users to only accessing chosen apps, and they cannot alter any settings or exit the kid’s mode without a password.

The ClickN Kids tablet is my first experience with the locked down type of experience of  a kid’s tablet, and since I am not a parent I might not catch all of the details that a parent might want to know. But after having read the 2 other reviews for this tablet (both written by parents) I have concluded that my perspective will add useful details that were missed.

At first glance the ClickN Kids tablet is a run of the mill Android tablet with a shiny black front and a shiny black rear. There are 2 speakers on the back, and the single camera is centered above the screen.

The ports, card slot, and buttons are all on the bottom edge. There are no volume buttons, but there are buttons for power and home. Its one most visible feature is the rubber edge protector, which is available in a variety of colors and can be removed.  This tablet is equipped with a 7″ LCD screen with a resolution of 480 x 800.

It runs Android 4.1 Jelly Bean on a 1.5GHz dual-core CPU, which is supported by a Mali-400 graphics chip. It has 1GB of RAM, 5.1GB of storage, a microSD card slot and a 2MP camera. In general the hardware is okay, but I have noticed a few quirks that might be present issues. The first is that this tablet doesn’t use a standard microUSB power supply; instead it is one of the rare exceptions that use a custom power supply. Finding a replacement could be an issue.

Also, the USB port on the ClickN Kids tablet is the less common microUSB, not the standard miniUSB; again, finding a replacement cable could be an issue. And then there are the power and home buttons. I found myself frequently frustrated with these buttons; it’s difficult to tell them apart so I kept pressing the home button when I was trying to turn the tablet on and off.

It’s not impossible that a child might press the wrong button and then think the tablet is broken or the battery is dead, which at the very could be annoying (not to mention boring if the kid has no other activity to them busy). This is a concern, I think.

The screen resolution might be low but the general quality of the screen is better than most of what I’ve seen in this price range. This tablet has a wide viewing angle where the color quality is good enough that you can catch nearly all of the details in a movie. With luck (and a fair amount of cooperation) it should be possible for 2 kids to share this one tablet while watching a movie. You might want to spring for a double set of headphones, though.

I have been using this tablet for just over a week and I have developed a serious concern about the battery life. This tablet tends to run down after only a couple days on standby. That is not a sign of a good quality battery or hardware.. I would estimate that the actual run time is under the 5 hours of battery life that the manufacturer claims.

It’s not very good, but then again most tablets in this price range have marginal cameras at best. According to metadata on the test photos I took, the camera resolution is 1200 x 1600, or 2MP. But based on the visual appearance of the images I would rate the resolution as being a lot lower – VGA.

It’s a little surprising how good tablets have gotten in the past few years. The ClickN Kids tablet was more than capable of reading the mp4 file I loaded, even though the resolution was 1080p. It couldn’t display the video at full resolution, of course, but it did show the video at full screen. The audio quality was adequate, considering the price of this tablet, but it was still less than clear in a few places.

I played a number of games on this tablet, browsed the web, and ran a benchmark test (15172, Antutu). This is a pretty zippy tablet. It is as fast as any dual-core tablet in its price range, and it in fact got a benchmark test result nearly as good as the Hisense Sero 7 Pro, a quad-core tablet that sells for $129.

Based on a side by side comparison of the Sero 7 Pro and the ClickN Kids tablet, I would say that the only way to tell the difference is that the Sero 7 Pro is built with higher quality components. 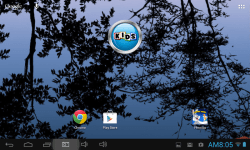 The ClickNKids tablet is a full Android tablet with Google Play, and that means you can download any app, ebook, or media purchased there. It ships with quite a few games, some of which are good and many of which are infected with adverts. While this tablet is pitched as a kid’s tablet, that is not quite true.

It does use Kids Place for parental controls, yes, which is accessible from the big blue button on the home screen. You can easily avoid kids being able to access the internet, download apps, and make purchases, and you can keep the tablet locked into the kid’s mode by securing it with a 4 digit PIN.

But I would also point out that the Kids Place app used on this tablet can be downloaded from Google Play. You should be able to turn any Android tablet into an equally functional kid’s tablet simply by installing that app. I could be wrong, but if I were a parent I would at least try to convert an existing tablet before buying a new one. You can see all of the apps available on this tablet in the screenshots below:

The ClickNKids tablet also ships with a literay app. This is outside my experience, so here is how Tech Age Kids described it:

The app is a comprehensive phonics program which teaches kids their letter sounds, tricky words, spelling and lots more. Kids are rewarded with Looney Tunes video content. It seems that 5 year olds will do quite a lot to see a funny clip of Sylvester and Tweety Pie!

This is a very comprehensive phonics course with many hours of material. It shouldn’t be confused with simple apps that just teach a small aspect of phonics.

Looney Tunes Phones is aimed at children in PreK-3 and is very comprehensive. It would cost $29.95 for a year’s subscription or $49.95 for a lifetime subscription so this is a significant value add if your child is at the right educational stage to use it.

You’ll get the best value if your child is just starting to read but there are 100 lessons and there was plenty for my 5 year old who is already reading fairly well.

When it comes to the basic hardware this is a decent tablet with specs and performance that are better than what you would expect in a sub-$100 tablet. Performance and general responsiveness were good, and so was the construction quality. But I was disappointed in the battery life; I was unable to use the tablet for more than a few hours over a couple days without having to recharge the tablet.

And I was also put off by the advertisements that came bundled into a number of games. The adverts included nag screens asking me to post reviews as well as pitching other apps. And yes, the adverts showed up on the kid’s walled garden.

And finally, I’m not sure what makes this a kid’s tablet other than the walled garden app and the phonics app. Since you can get the former in Google Play, you need to ask whether you need the latter. If you don’t need the phonics app I would suggest trying to add a kid’s mode to a tablet you already own. That could prove cheaper than buying a whole new tablet.