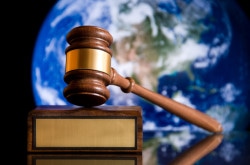 The antitrust lawsuits brought by 3 ebook retailers took an unexpected turn on Thursday when Judge Denise Cote ordered the 3 plaintiffs to enter into mediation with the Price Fix 6 to settle claims that Apple and 5 US publishers had conspired in 2010 to raise and fix ebook prices.

In a conference in her Manhattan courtroom, Judge Cote conferred with the parties on discovery issues, and outlined a schedule that could have the case ready for trial by late 2015. Although a final schedule was not set, the judge said she would order the parties to enter mediation in December.

In pre-conference filings, attorneys for Apple and the publishers had asked the judge to “bifurcate” the case—in essence, to “litigate whether the conspiracy alleged…actually caused the damage claimed, before addressing the underlying merits of Plaintiffs’ antitrust claims.” Cote, however, citing more expeditious discovery, declined to break the case into stages.

Initially filed as three separate lawsuits, this suit alleges that the Autralian ebook firm Dnaml as well as the defunct US ebook retailers BooksOnBoard and Diesel eBooks were harmed “directly and as a proximate result” by the 2010 conspiracy between 5 US trade publishers (Hachette, HarperCollins, S&S, Macmillan, and Penguin) and Apple.

The first lawsuit slipped by under the radar when Dnaml filed it in September 2013, but the latter two lawsuits got more attention when they were filed in early 2014. Both retailers had failed and shut down, resulting in their successor companies, Lavoho LLC (Diesel eBooks) and Abbey House Media (Books on Board), filing a lawsuit after terminal damage had already been done to the businesses,

Apple and the 5 publishers had tried to have the lawsuit quashed in June,  but in a 22-page opinion Judge Cote ruled that it was “more than plausible that a discount retailer was harmed by a conspiracy to remove retailers’ ability to discount e-books”, adding that the retailers were “indisputably competitors in a market in which trade was restrained.”

No details have been revealed about the specific damages awards sought by the plaintiffs, but to be honest I do not expect this lawsuit to amount to much. Sure, I’m cheering on the retailers, but the three retailers were not exactly powerhouses even before Agency went into effect in April 2010. In fact, even Judge Cote has said that proving damage in terms of lost revenue was going to be difficult “in the extreme”.