Remember last week when a drunk govt employee crashed a quadcopter on the grounds of the White House?

DJI, the company which makes the thousand dollar drone that crashed last week, is a little embarrassed by the irresponsibility of one of their customer, and the bad publicity has inspired them to push forward with a firmware update which adds a number of no-fly zones where the drone will be blocked from operating. 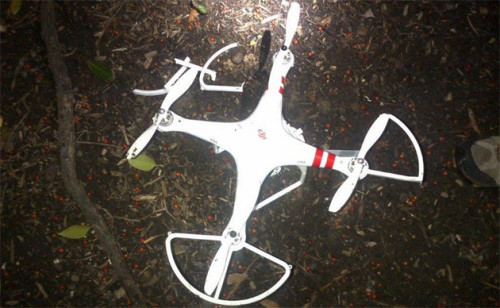 According to Engadget and Time, DJI is pushing out a firmware update for the Phantom 2 drone which will block the drone from being flown anywhere within 15.5 miles of downtown DC. It will also add no-fly zones for US airports.

I’m still waiting for a confirmation from DJI, but at this time I do know that Time is reporting:

The company said it would release what it called a mandatory update for its drone operating system in the coming days. The update would automatically disable drone flights over Washington D.C. and fence off no-fly zones around than 10,000 airports across the country. However, owners of most DJI drones won’t be forced to download the update — those who choose not to install it would just miss out on new features down the road.

“We are pushing this out a bit earlier to lead in encouraging responsible flight,” said DJI spokesperson Michael Perry. “With the unmanned aerial systems community growing on a daily basis, we feel it is important to provide pilots additional tools to help them fly safely and responsibly.”

The Phantom 2 drone costs $899 from DJI (and up) and weighs in at just under 3 pounds. And for those who live in DC, it is now a very expensive paperweight.

And it wouldn’t be possible without DRM.

There have been times where I have been tempted to take a milder position on DRM, but then shit like this happens and I am reminded just how wrong DRM is from concept to practice. While some might claim that DRM exists to protect content creators, time and again it is used to abuse the rights of the end user.

Whether it’s making it impossible to transfer legally bought ebooks between devices, breaking a $200 litter box when it runs out of cleaning solution, or making movies vanish from a user’s account, or blocking users from installing a 3rd-party coffee pod, DRM is clearly a user-hostile technology.

Update: A reader has pointed out a key detail which I missed and may change your opinion. It’s illegal to fly drones in DC, a fact which DJL acknowledges on their website. In short, DJI is choosing to enforce federal regulations when they have no obligation to do so.

While that is their privilege, I still object to their decision to retroactively turn a thousand dollar drone into a paperweight.