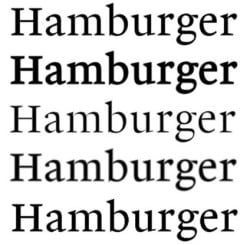 Did you ever wonder why Amazon developed a custom font just for its E-ink ereaders in 2012, and then developed a completely different font (Bookerly) or the Fire tablets last year?

If you’d like to know why Kobo developed the Nickel font for its ereaders but isn’t using the font in its iOS apps, or why Google commissioned the Literata font, then I have a video for you to watch.

Yesterday I got into a discussion of fonts, and that inspired me to go dig up a video of one of the sessions at the eBookCraft conference held in Toronto in March.  Steve Matteson, a type director at Monotype, gave a 29 minute history of fonts and typography from the Gutenberg press until today.

The first half of the video was kinda interesting, but the part you must see starts at about the 15 minute mark. Matteson explains how fonts used for printing differ from fonts used for LCD screens, and he explains why fonts are designed differently for E-ink screens.

For example, one slide compares what a font is supposed to look like with what it actually looks like on an E-ink screen:

He then goes on to explain how a font is designed for specific screens (both LCD and E-ink) versus print, the impact of size on readability, and a bunch of other issues which will interest any reader of this blog.

I’ve embedded the video below, but before you watch it you should head on over to Slideshare and grab Matteson’s presentation. He illustrates his points in the slides, but not enough of the slides were inserted into the video. You’ll need to flip through them yourself.

P.S. You can find more videos from eBookCraft and from Tech Forum over on the BookNet website.