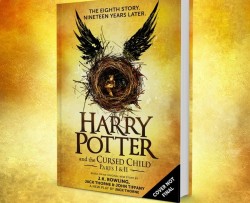 The Washington Post and many other sites report that JK Rowling has realized that the majority of her fans will never be able to see Harry Potter and the Cursed Child, the stage play set nineteen years after the end of the Harry Potter books, and so fans around the world are finally getting what we have craved for the past eight years.

On Wednesday Rowling announced that the script for the play would be published as a book (of sorts). Harry Potter and the Cursed Child is due out on 31 July, the day after the play opens in London, but it will be less a book than an unfinished script for the stage play.

According to the press release, the ebook “will comprise the version of the play script early in the production’s preview period, several weeks prior to the opening performances”.

So this won’t be the eight Harry Potter novel we were hoping for, but it won’t be a complete loss. I, for one, want to know what happened after the epilogue at the end of Deathly Hallows, so if this ebook is cheap enough I just might get it.

The few details mentioned in the announcement have me intrigued:

It was always difficult being Harry Potter and it isn’t much easier now that he is an overworked employee of the Ministry of Magic, a husband, and father of three school-age children.

While Harry grapples with a past that refuses to stay where it belongs, his youngest son Albus must struggle with the weight of a family legacy he never wanted. As past and present fuse ominously, both father and son learn the uncomfortable truth: sometimes darkness comes from unexpected places. 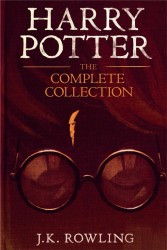 In related news, Teleread has noticed that you can now find all seven Harry Potter novels in a single omnibus edition in the Kindle Store. Harry Potter: The Complete Collection is listed at $15, or about 74% off the price Pottermore charges in its own store.

If you don’t mind that it is an omnibus and not a bundle of seven ebooks, that’s a very good deal.

Edit: Or at least it was a good deal; the sale has ended.