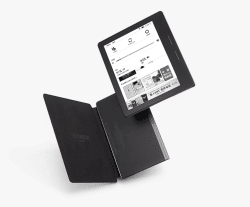 e would hear more about the next “top of the line” Kindle this week, and once again we didn’t have to wait for official sources.

A new leak out of China confirms that the new Kindle Oasis has the battery-case, page turn buttons, and accelerometers mentioned in previous leaks, only they’re not quite in the places you would expect.

Update: Amazon leaked additional details on its Canadian website which confirm this report.

If these images are real (and I’m still waiting for a denial/confirmation from Amazon) then Google Translate tells us that the Kindle Oasis will measure 3.4mm thick at its thinnest point, weigh 131 grams, and have a 300 dpi E-ink screen. (In comparison, the Kindle Voyage weighs 180 grams, and measures 7.8 mm thin.)

And best of all, the Oasis appears to feature an asymmetrical design with page turn buttons on one side of the screen. Far from being a one-handed design, the Oasis will use the accelerometers to automatically invert the text when you flip the device around and hold it with your other hand: 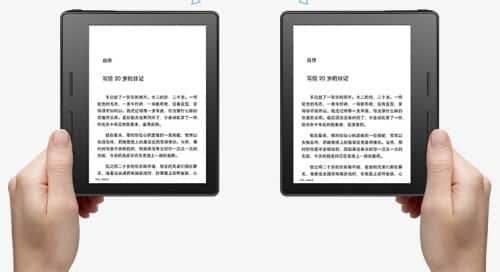 The leak also suggests that the Oasis will have a frontlight which has 60% more light sources, and another image confirms the powered connection between the case and the Oasis:

I’m still putting the images through Google Translate so I can parse additional detail, but that’s all I have for now.

I have not, for example, found a mention that the new Kindle is waterproof. So it looks like that guess was wrong.

If you would like to help translate the text in the images, I have embedded them below.

P.S. This is not the first ereader with a lopsided design, though it will certainly be the most famous. The never-released txtr Reader had a left-handed design when it was announced in 2009, and Ukrainian ereader maker Pocketbook has released a couple 8″ models, including the Pocketbook Inkpad. I fucking loved mine, so don’t listen to naysayers who call the new Oasis ugly. Try it first.

Edit: Pocketbook also released the 360, a one-handed ereader with a 5″ screen. That was a great device, which could even play Doom.