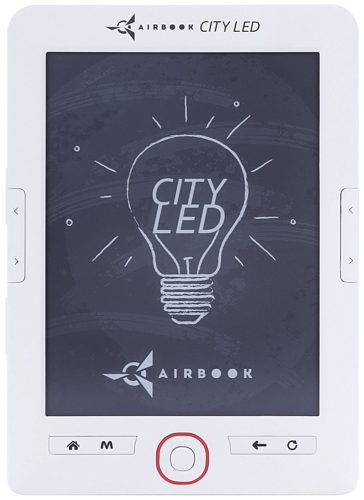 The ereader company Airon may be based in the Ukraine, but they also sell through Amazon.com. Airon’s latest ereader, the AirBook City LED, is listed on Amazon for $75. I just announced the release of that ereader last week, so that is fast work for Airon.

The AirBook City LED sports a 6″ Pearl E-ink display with screen resolution of 1024 x 758. It has a frontlight and audio, but no touchscreen or Wifi.

Instead this ereader has page turn buttons to the sides of the screen, and a d-pad and menu buttons below the screen. It also packs in a 1.5AH battery, 4GB internal storage, and a micro SD card slot.

All in all, this is a pretty good ereader for $75. While we can’t judge performance sight unseen, what we know of the specs suggest that this could be a great ereader for anyone who just wants something cheap and doesn’t care that it lacks Wifi.

Personally, I am finding more and more that I value a frontlight over any other feature, so this ereader has an immediate appeal to me. Since I spend more time in the act of reading than I spend navigating the menus or downloading files, a frontlightgets used more than the touchscreen and its absence is dearly felt.

So I have ordered an AirBook City LED, and I will post a review when it arrives.