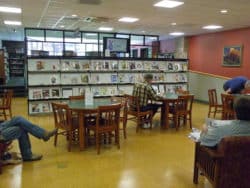 In February 2015 Overdrive announced that it had struck a deal with B&N to provide the current issues of 1,000 different magazine titles. Libraries could pay a subscription fee and their patrons could read whatever had been published in the past month.

That partnership came to an end in July 2016, but the news only crossed my desk today.

There’s been no formal announcement from Overdrive or B&N, but the Wisconsin Public Library Consortium did issue a statement last month which confirmed the news:

We regret to announce that, effective October 1st, magazines will no longer be available in Wisconsin’s Digital Library.

We appreciate your patronage of Wisconsin’s Digital Library, and we are very sorry for this inconvenience.

I can’t say that I ever used the service; as a rule I find e-magazines cumbersome and psychically painful.

But I doubt it was very popular. The periodicals were only available through the Nook app, and that detail probably tripped up most patrons.

It is annoying enough just to borrow library ebooks, even when you use the OD app and website. (This is why I borrow paper books.) Adding an extra layer of complication would discourage all but the most intrepid and tech savvy.

Did you try the service? What did you think?