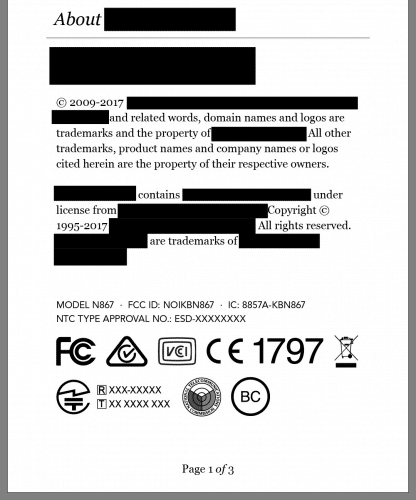 When I broke the news on Kobo’s new ereader last week, I speculated that it might launch in April. Judging by the FCC paperwork I found today, I think I nailed it.

Kobo’s latest ereader showed up on the FCC website today.  Most of the useful details like the screen size were obscured, but I can report that the paperwork referred to this device as the Kobo Aura H2O.

This device was tested for Wifi, and most likely has the same screen size and resolution as one of Kobo’s existing models (we know this from what did not leak last week with the model name).

Judging by the screenshot included with the paperwork, the new Aura H2O will have the same screen resolution as the previous model: 1080 x 1440.

If we put two and two together then this means we are looking at another 6.8″ Kobo ereader. On the one hand, that’s good news because it is a great screen size which closely emulates my preferred 7″ tablet only without the backlight or color issues.

On the other hand, I was rather hoping for a sharper screen or a larger model. E-ink does have a 10.3″ screen in the works, and Kobo could have counted coup on Amazon for the second year in a row by being the first to use that screen.

But I guess we will have to wait for next year.

thanks, Ricardo, for the tip!