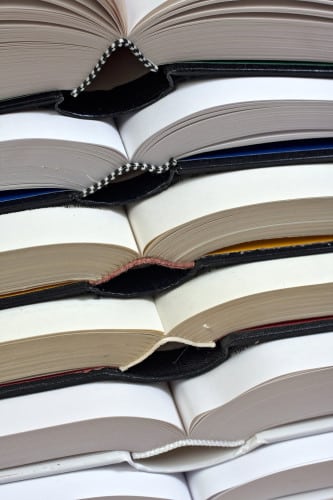 Remember a few months back when The Guardian told us that books were getting longer? That report eventually proved to be unsubstantiated after I showed that the source had an ulterior motive, but it turns out that the hypothesis was correct.

Books are getting larger (also longer, and that’s not the same thing).

Writing over at The Booklist Reader, Brianna Shemroske writes that she sampled The Booklist’s archives to put together a survey of book page counts over the past 40 years.

Luckily for me, Booklist—being the 111-year old review journal that it is—is a rich source of records. …

I collected data from seven issues of Booklist: the January 1 and 15 issues of 1976, the January 1 and 15 issues of 1986, and the double issues from 1996, 2006, and 2016. In each issue, I focused solely on reviews of middle-grade fiction. Because intended grade ranges often fluctuated by decade, I decided to allow a handful of varying combinations—so long as they fell somewhere between grades 3 and 8. Common grade ranges included 3–5, 4–7, and 5–8. Though the 6–8 range was ambiguous, I ultimately excluded it from my data because it’s commonly categorized as YA here at Booklist.

That said, a book with 290 pages had gotta be longer than one with 106 pages, so yes they are also getting longer. (Although, I would judge a book’s length by what happens, rather than word count. Excess description doesn’t make a book longer so much as more tedious.)

As we can see in the chart, most of the increase happened after 2006, and I bet you can guess which series gets the blame for inspiring longer YA novels:

The adventures of the boy who lived started at a reasonable 77,000 words in The Philosopher’s Stone, tripled in size by the time of The Goblet of Fire, and reached its peak in The Order of the Phoenix (257 thousand words). The last two books were long, but still shorter than Phoenix. (You can find the page counts over at Quora.)

According to the reviewers over at The Booklist, the fantasy genre also skews the survey group. “Fantasies tend to be really long,” one explained. “Authors are building another world. Readers of fantasy want to get lost in those worlds.”

I don’t know that a reader’s desire to get lost in a novel necessarily translates into longer books; some of the mega novels I’ve read, including George RR Martin’s, owe their length to a cowardly editor who didn’t have the guts to trim the excess.

That said, the epic mega fantasy novel series has arrived, and Harry Potter gets most of the creditfor the YA aspect of the phenomenon. It made all the subsequent epic novels possible.

Engadget, The Verge, and Gizmodo Have Already Seen The OLPC XO-3 Tablet

It Must be Time for Midterms – CourseSmart is Down

I think you can thank Robert Jordan for the increase in length of fantasy novels. The Wheel of Time series was out long before Harry Potter.

Yes, but I was thinking that YA category averaged shorter than adult novels because publishers thought kids couldn’t handle longer novels.

Harry Potter showed that was not the case.