A brief hands on with the Cruz Reader (video) 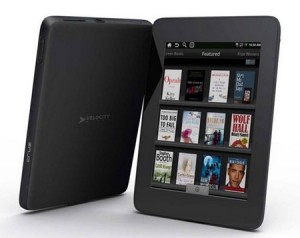 My local Borders bookstore got a Velocity Micro Cruz Reader on Friday. I’d stopped by yesterday but unfortunately they had made the natural mistake of assuming it would charge over USB. That doesn’t work with this hard ware.  So I went back today and played with it for about a half hour. I also shot a couple videos (they’re at the end of the post).

FYI: this is an Android tablet running v2.0 on a 7″ (800×600) resistive touch screen with Wifi, SDHC card slot, accelerometer, and support for the Borders Kobo ebookstore. It’s based on hardware similar to the white Pandigital Novel. The retail will be $199.

Long story short: The Cruz Reader is a significant improvement over the white Pandigital Novel. (I still don’t like the resistive touchscreen, though.) But I’m comfortable with giving a conditional recommendation in favor of the Cruz Reader.

The size, weight, and screen were the same as the white Novel, but the rubber back on Cruz Reader made it a lot easier to hold. The screen calibration also seemed to work better than on the white Novel. The Cruz Reader uses the same onscreen keyboard, though, and it still sucks.

The software was generally more responsive. Page turns were faster, and they are triggered by a tap, not swipe. There was a task bar across the top of the screen (this solved the problem of a missing menu and back buttons).The task bar was easy to use and relatively error free.

It had the standard desktop, apps, etc (with the exception of the Android Market). But Velocity Micro did supply their own app store. I glanced through the Cruz App Store, and there were hardly any apps. But it did have apps for a bunch of other app stores, so you should be able to find the app you want relatively easily (unless it’s in the Marketplace).

The second video was actually shot first, but it got interrupted by an idiot who couldn’t be bothered to leave a voicemail message. I was in the middle of re-shooting the video when my battery started to die.

The Summharry: All of Harry Potter, in a Single Comic

Why B&N Can’t Ever Catch Up to Amazon #2: Usability

I also used the unit at my local Borders. I thought it was well constructed, feeling just like a mini I Pad but without the button on the bottom. I think you should have gotten more familiar with it before you made your video.

That would involve buying one or spending quite a few hours in the store. Neither was possible.

Can you post a video showing how the video playback of the device is?

I don’t have a video to test.

Someone on slatedroid just purchased a Cruz Reader, today. Hopefully we’ll have a better understanding of the specs in the next day or so.

You can check out the ongoing thread on slatedroid.com about it. Despite a few minor details, it’s turning out to be the same thing as the Pandigital Novel.

Resistive touchscreen I can’t recommend at all. Although the Archos 43 is said to have a resistive screen so sensitive it mimics capacitive — but still, multitouch is not possible, which is useful for zooming into photos and maps and things, which people might want to do, since this isn’t locked down into being a eBook device like the Pandigital Novel.

The velocity cruz ereader sucks. I bought one on preorder and made the mistake of buying a book through the border’s site instead of through the app. I cannot access the ebook at all and get an error message every time I try. The wifi setting keeps turning off after just a few minutes and I need to constantly reset it. When I tap or swipe to turn a page, half of the time the screen just freezes. I’m ready to send it back. Don’t bother. You’ll just find it frustrating.

P.S. Getting tech support is almost impossible. They’ll only talk to you through email until they’ve completed your registration process. They’ve sent me numerous confusing emails, and when I finally talked to a person, she had no idea how to help me. I could tell she had no knowledge of the product and I got a lot of "umm'" but no useful information.

Love the Cruz! Color! Easy use! Don’t forget
the BACKLIGHT! Try reading in bed without it!

The Cruz is the WORSE ereader out there and even WORSE customer support. I bought my Cruz in October and it died completely on me in December. Tried to get attention from them through their support hub and they deleted my tickets. Finally got a hold of them, but they would not pay the shipping either way and because I was in Canada, the warranty was nul and void. DO NOT BUY THE CRUZ. It is junk and I am out of pocket now and had to buy another reader, the Sony.

Just wondering, can a USB keyboard be used on this?

No. I wish it could work.

I purchased a Cruz reader in Oct. 1010. I like the device and for the dollar it is great for an e-reader or some very light internet browsing. But… I hate buying a broken product. When you boot this reader the first thing you see is the clock is wrong. It can not hold the time zone setting. Velocity Micro knows this and still sales the product broken as is. Just look at the date of the last firmware update Oct 10, 2010. I contacted Velocity’s support but got nowhere. Not even a hope of a future firmware update. There is no support coming from Velocity Micro. I am not asking for new features, I just want what I paid for to work properly. Best to look somewhere else for future purchases.

Trying to download a flashdrive of some type to be able to get pictures. Right now I get no pics. Thanks, Sonny

Awful Reader, touch screen is crap. No wonder it was so inexpensive to purchase. Add me to the list of never to buy Velocity products again.

bought this item for 200. I am very very disappointed. It takes all day to charge, forever to get wifi (thus very irritating to download books), I can’t seem to turn the item off correctly and thus uses the battery up.
I thought the "l" issue on the keyboard was only on MY Cruz…but saddly it appears to be a universal issue. I have a NOOK but no lite (the Cruz does have a light for nite reading) but overall I am far far far more happy w/ my Nook then the Cruz.