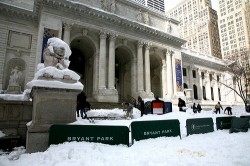 The Financial Times has an article on the NYPL on its website this week and it’s raising some eyebrows.

The article looks at the general change in direction that the New York Public Library has taken in the past few years in de-emphasizing the warehousing of books in favor of creating spaces for people to use and adding new ways for library patrons to access information.

If you’re not already familiar with the controversy surrounding the NYPL’s plans to de-emphasize books, it’s an interesting read. But there was one detail in particular than caught some attention:

Since 2009, the NYPL has quadrupled its budget for ebooks, and spent $1m on 45,000 ebook copies. Indeed, Marx envisages his library as being akin to a giant cyber educational hub, offering anyone access, anywhere in the world, however poor. “We need to be the leading educational programme, cradle to grave,” he says.

Mike Cane tweeted that stat and was shocked by the fact that the average cost was around $22 per copy. I’m not.

One million dollars spent over 4 years isn’t exactly a lot of money, and that goes triple when you consider the size of the NYPL’s annual budget. That organization has an annual budget in excess of $240,000,000, so the money spent on ebooks is little more than a rounding error.

What’s more, that million dollars isn’t all that well explained. For all we know it might include expensive titles that are only offered to the library market with terms that libraries want (multi-user access, for example). And that huge sum also includes the maintenance fees that Overdrive charges above and beyond the price of the ebooks they sell to libraries. And then there are the higher prices that Hachette, Random House, et all charge for library ebooks. That alone could explain the high per-copy cost.

Once you know the context and some nitty gritty details this story isn’t quite so interesting, is it?

P.S. I’d love to read more about the real stats on what the NYPL spends on ebooks, but so far I haven’t managed to connect with the right person at the NYPL. If there’s info that can be shared, please let me know.

Cruz Reader, Tablet now up for preorder at Borders

I have no doubt that some of the money — probably a good chunk of it — was spent on specialty books and journals that cost an arm and a leg, if not 2 arms and 2 legs. Plus, let us not forget that publishers like Simon & Schuster and Macmillan charge libraries more for an ebook than the general consumer. Not everyone works like Smashwords.

Library and Book Trade Almanac 2012 has some interesting tables that shed a bit of light on this subject, if not specifically on NYPL’s ebook expenditures. Considering their status as an educational institution, not just your average public library, I figured I’d look at the average prices of academic ebooks. The average price of an academic ebook (averaged from all subjects) in 2010 was $116.25. These aren’t textbooks, but they are books you might expect to find in an academic library or a large public library. By comparison, the average price of a "regular" ebook (something you might find at small to medium public library) in 2010 was $41.61. (Data taken from Table 4A, pg 491, and Table 7B, pg 507.) Those more expensive educational ebooks probably account for a good portion of what was spent, wouldn’t you think?

Now that is interesting context. Thanks!

Maybe NYPL has changed things, but when I was borrowing eBooks, it was strictly all OverDrive, for the general public, nothing specialty that I could see.

I am part of the selection team for a network of libraries and the prices for popular ebooks has tripled in the past two years. Drift by Maddow costs our libraries less than $25 in hard cover more than $80 in the ebook format. Most libraries also purchase more copies as patrons place more holds on a title and we purchased about 10 more copies to met this demand. Some libraries have stopped buying these expensive ebooks altogether because the price point set by some publishers is decimating our budgets. No good answers right now but I would love to see more publisher look toward the Happy Potter model – price for ebook a bit higher than price for hardcover, 5 year license which can be renewed – much closer to the model used by libraries in the physical collection than the 26 circs used by Harper-Collins @Noreen13