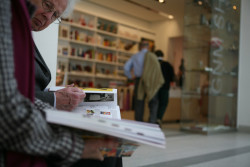 Last week BuchReport.de broke the news that Bundesgerichtshof, the German Federal High Court, has ruled that Amazon had violated Germany’s fixed price book laws when it gave a 5 euro credit to customers who traded in books. That credit could be used to buy anything on Amazon.de, including books, leading some to argue that this broke the law.

The German bookseller trade group Boersenverein certainly thought so, and that is why they sued Amazon in 2012. According to the announcement of last week’s ruling, Amazon lost that case in August 2013, and then lost the appeal in January 2014, and now Amazon has lost the case for a third time last week.

Yes, Amazon has lost this case three times. What can I say, they take the book price control laws very seriously over in Germany.

Kidding aside, Germany’s laws are more complex than simply restricting the retail price of paper books and ebooks. Apple, for example, broke the law in 2013 when it sold discounted iTunes gift cards which, coincidentally, could be used to buy ebooks in iBooks. Amazon has also previously tried to get around the price restrictions by offering free shipping on books. This was over 5 years ago, and Amazon was initially successful but was later slapped on the wrist for their efforts.

Germany’s price control laws are intended to maintain a diverse retail landscape by restricting price competition, and to some degree it is working. But the laws don’t restrict larger retailers from negotiating better discounts, and it has not stopped Amazon from becoming the single largest ebook retailer and one of the leading online book retailers.

But it has slowed Amazon down considerably.

Competition has created a market for DRM free e-books.