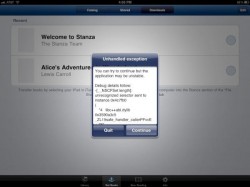 It looks like I was right 2 months back when I predicted the end of Stanza; the latest version of iOS was released yesterday and Stanza won’t run anymore.

Update: It took Amazon a month to release it, but there is an update for Stanza.

A friend took the screenshot at right. It shows the Stanza app having a rather impressive crash. To be honest, I’ve never seen such a crash before; most apps just shut down quietly.

iOS5 offers a lot of valuable improvements, new features, and other cool tricks, but it also changed enough that it broke a number of apps. Over the past 5 or so months that it has been available as a beta release, app developers have had the chance to test their apps and fix the problems they found.

But it doesn’t look like Amazon bothered to put any effort into fixing the Stanza app.

There have been numerous crash reports going back 4 or more months and yet no word from Amazon or Lexcycle on when the problems would be fixed. I’d say that is a good sign that Amazon stood back and let the new update kill the app.

All the other reading apps I’ve checked work just fine on iOS5, which means that the developers of the apps proactively worked to identify and correct any issues. Amazon did this for the Kindle app, and I know of a couple other reading apps that even mention iOS 5 in the update notices. The digital textbook developer Kno have even sent out emails warning about possible issues with their app.

This is a time where I regret being right. I had hoped, for the sake of Stanza’s users, that Amazon would come through in the end. Nope. Stanza was last updated back in February 2011, and it looks like that was when Amazon pulled the plug.

Stanza was one of the first best apps on iOS when it launched in 2008, and its success paved the way for all the rest of the reading apps. Amazon bought the company in 2009, for their own reasons. I’d always thought that Amazon bought Stanza just to make sure Apple couldn’t. Given that Amazon appear to have abandoned the app, it looks like I was right.

A Year of Library/Consumer eBook Price Comparisons: Has Anything Changed?

[…] software, one of my favorite ways to read e-books, is dead for those of us using the IOS 5.0, the new operating system for the iPad, the iPhone,and iPod Touch […]

Dammit. Stanza was my favorite reading app to date.

Just repeat the mantra "Amazon is my friend" and you’ll feel better, Nate. Amazon must have done this to protect you — isn’t that what friends are for?

Just like they killed off Mobipocket, why should they keep Stanza if they have their own reader app now? Nothing new here, looks like standard Amazon practice!

[…] app probably won’t be updated anytime soon either. The company that produces Stanza was acquired by Amazon a few years ago, and […]

I agree with Janice. Stanza was my eBook app of choice. (sigh) Time to start putting a hundred-some-odd books into either Bluefire or Tomes.

I found an app "BeyondPrint" seems to do most of the same as Stanza including reverse text.

My question would be how to port the books I bought for use with Stanza to another reader and what would that reader be?

Please email me any answers to definer AT earthlink DOT net

How to retrieve library files from Stanza’s dead body? Who knows? Stanza was the best reading app on the planet. A good lawyer will enjoy suing both Amazon and Apple for not proper attitude to thousands of customers who lost their books because of this policy.

The cry of "murder!" may have been premature. Reports have surfaced that there is an update available for Stanza. http://www.mobileread.com/forums/showthread.php?t=156589

[…] /* */ A reader has just tipped me to some great news. It looks like all that doom and gloom over the death of Stanza last month was a little premature. Amazon pushed out an update for Stanza today, and now it finally […]

To keep Stanza alive and get tech advice, join "Revive Stanza for iOS 5" on Facebook on.fb.me/revivestanza.

Stanza is now dead for those of us not on IOS5.

The most recent update of the app dies not work on my iPhone 4g. It crashes immediately. Reaching out to the "developer" gave no response at all. I use the word developer advisedly, as any inquiries point to a web site that allows users to comment, but has never had any comments from developers at all.

There is an easy fix for stanza if it crashes after latest IOS update.
Just go to app store on ipad or iphone
Click the little swirly thing on the bottom right its like a refresh symbol
Go though the apps on the cloud until you find stanza.
Click stanza and it will reinstall.
All your books will be back and it will work perfectly.

Making ePubs and the Return of the Format Wars | Biblioblogaroni February 6, 2012 um 9:13 pm

[…] As an example of the range of e-book reader software that can be required, an iPad can be equipped with the iBooks reader, the OverDrive media console, and the Bluefire Reader. Stanza was considered a great reading app for Apple iOS but development on it has stopped (“Amazon Killed Stanza”). […]

As Apple and other companies endeavor to address the relevance of the electronic book medium – and the further capabilities of the mobile computer medium, in which regards – for public and private schooling (for instance) I expect that that standards like OPDS could come to be of some further, obvious relevance in the literary domain.

Stanza itself has a comfortable sort of usability to it. Considering that, and its broader features, I hope Amazon.com will continue to release Stanza as a stand-alone app, even in parallel to releases of the Kindle reader.

Considering the Kindle app’s more limited features and (therefore) more narrow market, and in speculating as to the penchant for companies (essentially) to bureaucratize usability out of a platform – making usability "go away" once the developer team in a project might become, one presumes, more bureaucratic, more than either democratic and/or agile – well, I don’t want to take a negative view about it, though.

Among all its broader features, Stanza supports (1) OPDS and, (2) a significant range of electronic book formats (such that I’m not aware of whether the Kindle app supports or not) and I think Stanza is still an excellent app, for that. I simply hope it doesn’t get ignored for that.