Amazon Opens a New Chapter in its Retail History

Remember that bookstore that Amazon was rumored to be building in Seattle?

It officially launched today, and is opening tomorrow.

Amazon has sent out a letter to their Seattle area customers with the news that Amazon’s first bookstore, located at in the University Village shopping center at 4601 26th Ave NE, is no longer rumor or speculation (you can find the letter here).

Unlike Amazon’s past retail efforts, which focused on vending machines, delivery lockers, and pickup/dropoff unstores, the new Amazon Books has actual books in stock on its shelves, as well as Kindle ereaders, Fire tablets, and other Amazon hardware. 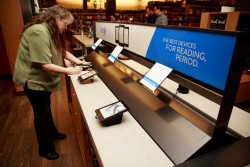 image via the Seattle Times

The Seattle Times got an early look at the store, and they report that the store won’t double as a pickup/drop-off location. It’s strictly a retail store, and according to Jennifer Cast, the VP of Amazon Books, the store won’t be stocked solely on data. "It’s data with heart,” she told ST. "We’re taking the data we have and we’re creating physical places with it." 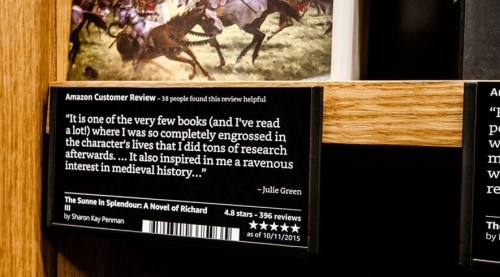 Amazon is also including a special staff favorites section that will change periodically. For the opening, the section includes a few of Amazon CEO Jeff Bezos’ favorite books, including The Five Love Languages by Gary Chapman, Traps by his wife, MacKenzie Bezos, and The Gift of Fear by Gavin de Becker.

The books will be sold at the same price as found online.

To put it simply, Amazon is taking what they’ve learned from twenty years of selling books online and is adapting it to the offline world. In a time where most bookstores arguably are no longer bookstores (just look at how much B&N floor space is devoted to toys), Amazon is going to show their competitors just how bookstores are supposed to work.

Or at least that is what Amazon is hoping; whether it will work out is a different matter.

Amazon has chosen an expensive location for its first store. University Village is an upscale shopping center that used to be the home to a Barnes & Noble store (it moved out four years ago when its lease expired and rent went up).

With the high rent, the odds are stacked against this store being a success based on the numbers, but Amazon has been known to run pilot operations before expanding.

Unfortunately for us, Cast declined to reveal Amazon’s plans, including possible locations. “We’re completely focused on this bookstore,” Cast told SA. “We hope this is not our only one. But we’ll see.”

Alcatel’s 3.5″ eReader Made an Appearance at Computex, Now Known as the e-Card

Hmm, presumably they’ll carry Amazon imprint titles, but what about Createspace books? Any hint of an Espresso machine in the store?

Excellent question. There’s no Espresso Book machine mentioned, but a device like that would make a great addition.

The amusing thing to me (as I noted in my own piece) is that the bookshelves in Amazon’s store effectively duplicate the face-out book selection screens in e-reader apps, in a sort of reverse skeuomorphism. I remember complaining about how unrealistic those book selection screens were when I first encountered them. Guess the joke’s on me.

@ Chris Except bookstores have always displayed some books face out. It was only on bookshelves in libraries that it was unrealistic.

"The books will be sold at the same price as found online."

The price online can fluctuate daily. Is the physical store going to match the current online price?

@ Puzzled I would assume so. I don’t see an actual price marked on the shelf label so it is possible.

The face out thing and the selection criteria both sound promising and will please the authors of the books they carry. The place looks like a blend of the best bookstores I ever visited. I have bibliophile friends in the area; I’ll ask for a report because I know they’ll be dropping by soon.

Btw, this store *may* serve one other purpose:
Remember that B&N organized a boycott of Amazon Publishing imprints and titles that was promptly joined by the indie bookstores.
By doing bookstores, Amazon increases the reach of its imprints and serves notice that if b&m refuses to sell their books, they’ll get into b&m themselves.

Best way for a small bookstore to avoid getting an Amazon store nearby might be to start carrying those pbooks. They *are* broadly available through the usual distributors.

We’ll have to see how this experiment plays out for Amazon.
But now they have *really* given the small B&M stores something to fret over.

Oh, as to their stocking POD titles?
No reason they can’t, even without Espresso.
Createspace and Lightning Source books are readily available to anybody open to carrying them. And Amazon logistics are good enough (especially in Seattle) they can carry pretty much anything they choose.

Now that you mention it, it would actually make more sense _not_ to have a POD machine in store.

Espresso Book machines are intended to solve a logistics problem that Amazon doesn’t have. Amazon has lots of warehouses in the Seattle area, they have customers accustomed to deliveries, and they have industrial scale POD equipment.

There’s no need to add a POD machine to the store. It’s redundant.

The way I understand it, they have been dumping their printing facilities in most of their bigger fulfilment centers. One thing they’ve been trying to get tradpubs let them do is backlist POD. That may yet come.

Btw, by dumping I mean, airlifting them in.
They’re putting a lot of those out there.
A good chunk of their investment has gone into POD.

@Nate Some books, yes, but not all books. It’s only the fact that they stock so many fewer titles than your usual 20,000+ title store that lets them do it, as it’s a bit of an inefficient use of the space.

Chris, bookstores in general are an inefficient use of the space in terms of the revenue they generate, so I’m not sure that there is a significant difference between a standard bookstore and Amazon’s model.

Given that half or more of books sent to a bookstore are returned any way, why not trim the selection to the point that the books on the shelf are displayed to their fullest?

So, are they only selling the books from their imprints or other publishers as well?

Other publishers as well/

Bookstore "efficiency" can be measured in many ways.
Main thing is, if the primary "efficiency" metric is going to be dollars per square foot, bookstores would not sell books to start with.
The second point to consider is that revenue-wise, bookstores operate under a very strong Pareto principle: over 80% of revenues comes from less than 20% of titles. An efficient bookseller would focus on those top revenue generators and, in fact, that is what newsstands, dept stores, and supermarkets do.
The dynamic of the superstores in their heyday was that their relatively deep catalog attracted browsers and increased sales of the moneymakers on the side by cannibalizing smaller stores and general retailers. The extra cost of low productivity floor space was offset by increased traffic. But once online shopping and ebooks entered the equation the value to consumers of a 30,000 title (or 100,000 title) catalog vanished against the three million title catalog and lower prices of the new players.

What Amazon seems to be doing is increasing "the efficiency" of their store by making it sell more of all the titles it showcases.
Think of their store as a book-tique.
They focus on books they think will appeal to specific audiences rather than just throwing stuff at the wall to see sticks.
These days the majority of books at a megastore is little more than wallpaper: Amazon is dispensing with spine out wallpaper and giving each title its own place to shine, cover forward, choice review below, and still discounted.

If this model gains traction (big if–they still have to compete with home shopping on their own website) it will generate more income per square foot than the megastores, not less.

The report doesn’t say if you’ll be able to "special order" specific titles not in the store, like earlier titles in a series, but there is no reason why they couldn’t. They are, after all, Amazon. They can easily offer free next day delivery to in-store orders even to non-Prime shoppers. Give B&M shoppers the best of both worlds; a spotlight for crowd-pleasing books (best sellers or not) backed up by their online catalog. And no angst about the ethics of showrooming. 😉

I mentioned in an article I linked to in my article that there’s a European bookstore chain that’s been operating small two-to-four-thousand-title stores in airports, train stations, and the like. I suggested it as a way that bookstores could compete with Amazon. Apparently Amazon has taken that to heart, and is following the same dictate to "disrupt yourself" that led to Netflix springboarding from DVD-rental-by-mail into all-you-can-eat subscription video streaming (and, for that matter, led world’s-biggest-paper-book-store Amazon to introduce the Kindle e-book reader in the first place). Of course, as self-disruptions go, this one is pretty small, but it’s just a proof of concept. If it flies, who knows how many more will pop up?

Eh. That chain is just more airport bookstores. We have them here as well (Hudson News, for example).

Edit: No, wait, the photos I found suggest otherwise. Hudson news is a newsstand, while PocketShop looks more like a bookstore.

[…] Amazon has a single bookstore in Seattle, as well as a double handful of kiosks in malls around the world, and they could well be planning […]

[…] hey, it's rarely a bad idea to copy Amazon.  That online retailer launched its first bookstore last fall just so it could learn more about how consumers browse for books in […]

[…] a news organization has to cover an important story like Amazon's new bookstore, they can usually either find an expert to write the article, or just have a staff writer do […]

[…] has already opened one bookstore, in Seattle, late last year. They have also announced plans to open a store in San Diego, and hinted at plans to open one in […]

[…] will include the type of upscale retail which Amazon chose for its first bookstore, which opened late last year in Seattle, making it a plausible candidate for Amazon's first east […]

[…] reactions to the launch of Amazon Books earlier this week were, for the most part, considerably less hostile and more curious about what […]

[…] opened its first bookstore in late 2015 in Seattle, and now has 8 stores open or in the planning stages on the east and west coasts. […]

Amazon is Looking Into Opening a Bookstore in Berlin | The Digital Reader December 18, 2017 um 8:48 am

[…] opened a bookstore in Seattle just last month, and they've also installed kiosks or opened pop up stores in Paris, California, and China, so we […]

Amazon is Making Their Bookstores a Priority, and Are Now the Fourth Largest Bookstore Chain in the US | The Digital Reader June 25, 2020 um 7:36 pm

[…] opened its first bookstore in November 2015 in Seattle, and since then they have announced, launched, or started developing 24 […]