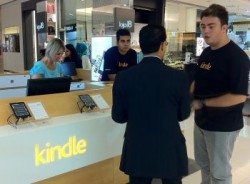 Here’s a surprising bit of news. It looks like all those rumors about Amazon getting into brick-and-mortar retail have come true.

There’s news coming out of São Paulo, Brazil, today that the Kindle is now being sold out of a kiosk in the Morumbi Shopping Center.

You can find Amazon’s basic model Kindle for the Brazilian retail price of 299 reais, the same price offered on Amazon.com.br as well as Ponto Frio, Amazon’s retail partner in Brazil.

Amazon only launched the Kindle in the Brazilian market in early December 2012, and it looks like they are taking chances in Brazil that they’re not taking elsewhere.

Excited reports aside, this kiosk is run by the Brazilian cellphone retailer Superfone, not Amazon. The branding and signage are not too different from Amazon’s other retail partners, though this will be the first to answer the phone with "Amazon, How can I help you?".

This kiosk is really not much more than the cellphone kiosk you might find in any mall, though the addition of the Kindle hardware is a little unusual. In fact, this kiosk is not too different in concept from the AT&T stores which have been carrying the kindle hardware since March 2011.

What we really have here today is a new retail partner for Amazon. Interesting news, but not earth-shattering.

We still can’t buy kindle through Amazon.com.br, only at Ponto Frio website. It seems that Amazon is still avoiding the problems related to product deliveries here in Brazil (huge territory, one big government-owned postal service) so it’s just an e-bookstore.
Amazon thought they would offer the cheapest eReader device to the Brazilian market, but Livraria Cultura announced this week that they will start selling Kobo Mini at the price of R$289.

They did something similar in Spain. Since last week you can buy some Kindle devices in big market stores (not only book related stores) around all Spain.

It looks like they could be doing the same thing in some other countries too.

Kobo and Livraria Cultura will start to sell the "paperwhite" [Glo] version in the next coming days, I hope Amazon start thinking about sell more versions of the Kindle. The greater the competition here, better for us =D

There is one detail that makes it more interesting than it seems. It is not a Superfone store selling Kindles among other products. The kiosk only sells Kindles and it is not inside any other store. The Superfone brand doesn’t show, just Amazon. Ok, it might be ran by other company, but for the customer it is an Amazon Kindle store, since that is all he can see there. I think it makes all the difference that the kiosk is not inside another retailer and does not carry other products, making it a pure Amazon point-of-sale.

Does anyone know where I could bring my kindle to be repaired in Sao Paulo?

What put me off is amazon selling here, through ponto frio, the simplest kindle available, no touch, no light, no keyboard, no anything! Sounds like dumping overstock in the poor, backwoods, third world country, a history that is not new in Brazil. Kobo touch is 100 reais more expensive, kobo mini is ten reais cheaper. I was the happy owner of a kindle keyboard for a year and two months, when its screen froze forever. Even with taxes, to buy in Brazil makes sense if you have technical assistance. What doesn’t make sense is to buy an outdated e-reader for a very updated price .